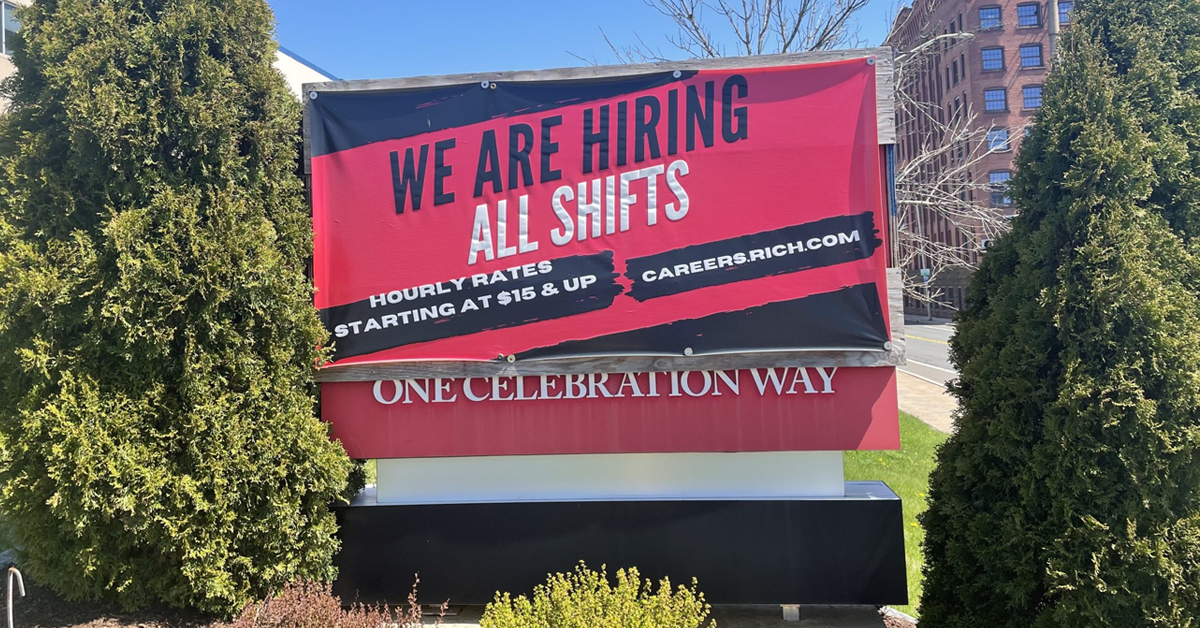 The Connecticut Department of Labor released job numbers for the month of June, showing an increase of 1,700 jobs, bolstered by hiring in the professional and business services sector, government and manufacturing, as the state’s unemployment dropped slightly down to 4 percent.

It was the sixth consecutive month for job gains in the state as Connecticut continues to recover from the COVID-19 lockdown. The state has now recovered 87 percent of the jobs lost during that time, according to DOL’s press release, and officials touted the numbers as a positive sign for Connecticut’s economy.

But the reaction from the Connecticut Business and Industry Association (CBIA) shows a different take on the report, noting that Connecticut’s year-to-date job growth is half that of the national rate and “the second slowest in New England.”

“Modest private sector job growth and a second consecutive month of losses in construction – often an early warning sign of an economic slowdown – highlight the need for comprehensive policy solutions,” said CBIA President Chris DiPentima in a press release. “Employers have the job openings – 120,000 open positions – but the workers needed to meet record demand for their products and services are simply not there.”

“If every unemployed person in the state was hired tomorrow, we’d still have a staggering 44,000 job openings,” DiPentimia continued, noting that Connecticut’s labor force declined by nearly 49,500 people since the pandemic.

CBIA pointed to Connecticut’s recent lackluster ranking in CNBC’s list of most business- friendly states, which found Connecticut’s economy and cost of living and cost of doing business as the state’s biggest weak points, saying those issues must be addressed.

Connecticut has been slow to bounce back from recessions, never fully recovering all the jobs lost in the 2008 recession before the COVID-19 pandemic hit, and although the country never entered into a recession during that time, rising inflation and losses on Wall Street have many concerned that a national recession is around the corner.

Economist Donald Klepper-Smith of DataCore Partners, LLC and former economic advisor to Gov. M. Jodi Rell, says he believes Connecticut will not reach 2008 job levels for another five years and sees more inflation in the pipeline.

“Given our current growth rate and given the pandemic and given the onset of recession, we’re not going to be seeing full job recovery for at least five years,” Klepper-Smith said, adding that he believes it’s “probable” a recession is coming.

“This is a situation where the producer price index is showing double-digit gains on a year over year basis, and the situation is such that is says there’s more inflation in the pipeline that consumers have yet to realize,” Klepper-Smith said.

In the job numbers release, Bartolemeo expressed concern over the impact of inflation and its effect on Connecticut residents and on the state’s financial services employment sector.

“We remain concerned about the impact inflation and energy prices have on Connecticut residents,” Bartolomeo said. “These are national issues with a potentially broad impact on residents, employers, and the state’s financial services sector.”

The financial activities sector, which are generally high-paying jobs, gained 200 jobs over May and June of 2022. It was the first time that sector saw an employment increase since April of 2016, according to DOL’s numbers.

The manufacturing sector, which has experienced a massive overall decline over the past three decades, has consistently been gaining jobs since April of 2021 and is nearing pre-pandemic levels as lawmakers focus efforts to create more training pipelines from schools and colleges into the manufacturing sector.

A State Economic Forecast by TD Economics, noted that “Connecticut’s pandemic recovery lags the nation with payrolls still down roughly 3% from the pre-pandemic period,” and noted that Connecticut’s labor market is “tightening, so finding workers may prove challenging.”

The economists praised Connecticut’s ongoing paydown of the state’s pension debt and recent tax relief measures but are predicting a slow-down in the state’s economy.

“These cuts will help make life a little easier for consumers against a backdrop of high inflation and surging interest rates. However, the low hanging fruits of the recovery have already been picked, and growth in the state is poised to decelerate from a little over 4% last year to around 2% this year,” the economists wrote.

“Economic recoveries are always uneven,” Flaherty said. “This is a solid and steady month, one that continues the positive labor market trends for 2022.”

Marc worked as an investigative reporter for Yankee Institute and was a 2014 Robert Novak Journalism Fellow. He previously worked in the field of mental health is the author of several books and novels, along with numerous freelance reporting jobs and publications. Marc has a Master of Fine Arts degree from Western Connecticut State University.
Email Author
More by Author
Twitter
ProtonMail
«Previous Post
Connecticut reverses decade-long growth in pension liabilities»Next Post
CT bat populations show signs of slow recovery