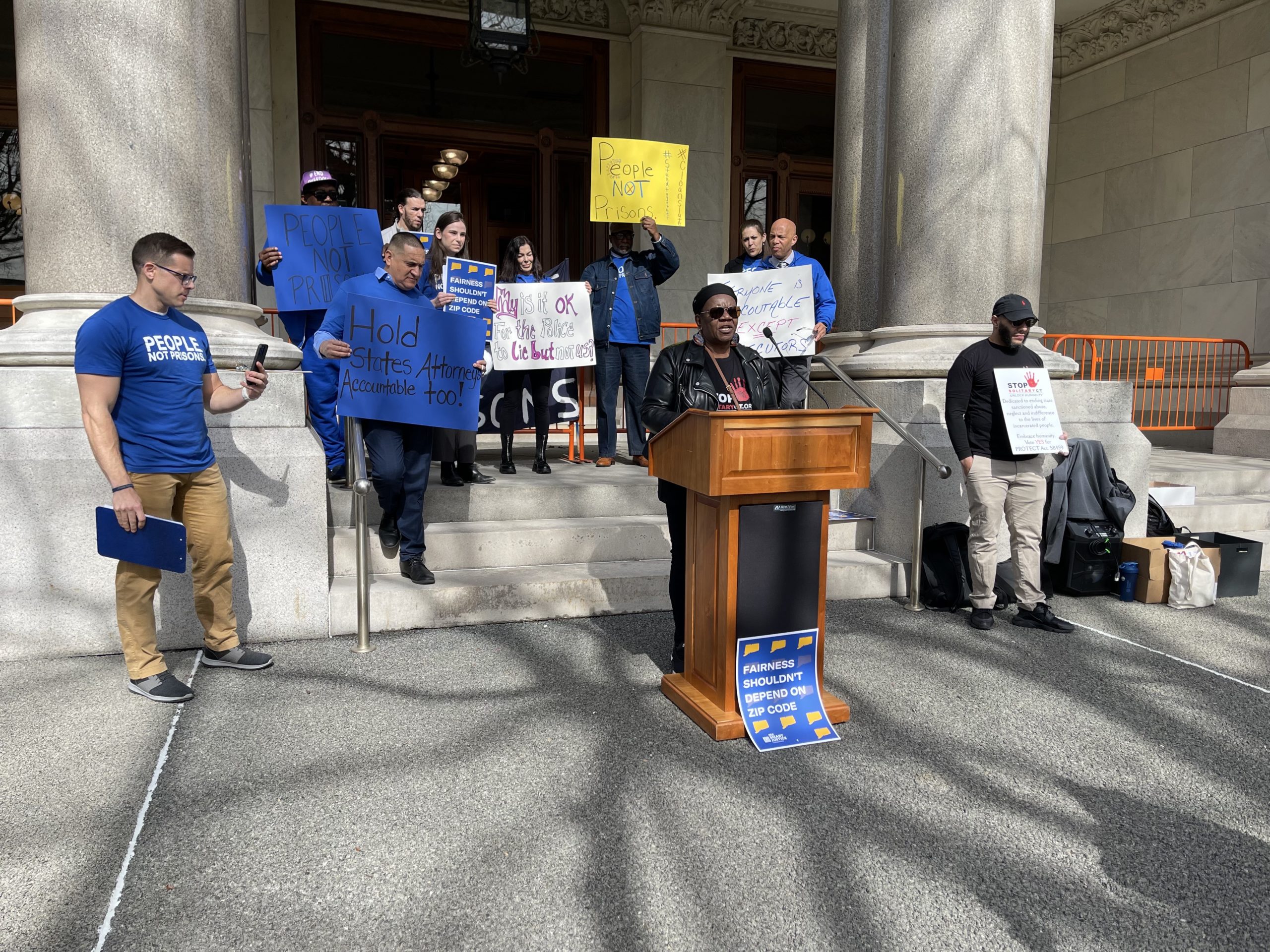 Representatives from the ACLU and Stop Solitary CT rally on the steps of the Capitol on April 13, 2022.

“People. Not prisons.” That was the rallying cry for the at least two dozen people gathered on the steps at the east side of the Capitol Wednesday morning. They represented advocates from the American Civil Liberties Union (ACLU), Stop Solitary CT, and local residents, all rallying for changes they say would make the state’s criminal justice system fairer.

“There are 21 days left in this session,” said Gus Marks-Hamilton, ACLU’s campaign manager, to kick off of the rally. “Twenty-one days left to continue addressing the systemic issues in Connecticut’s criminal justice system that have made hundreds of thousands of people in this state second class citizens.”

The rally itself was part of the ACLU’s ongoing effort to address what they call “both sides” of the criminal justice system. They’re working to address systems which result in the imprisonment of thousands of Connecticut citizens as well as those which affect them post-release.

Underlying all of Wednesday’s arguments was the disproportionate rate at which Black and brown people encounter the criminal justice system in the state. According to statistics from the Prison Policy Initiative, Black and Latinx people make up just 23% of the state’s population but 70% of the population of its inmates.

The group was there, though, specifically in support of four bills before the General Assembly this session. Those include House Bill 5248, which seeks to end practices keeping people with criminal records from receiving professional licenses. Among those speaking in support of the bill Wednesday was Manuel Sandoval, who says he has been denied a social work license despite completing a master’s degree.

“I am currently under probation with the Department of Public Health. I have to provide them with quarterly documentation in order to be licensed,” he explains. “This is unjust because our experiences as previously incarcerated individuals are robust and life changing, and given the chance, can empower beyond our imagination.”

Under current state law, the Department of Public Health can deny an application from someone with a criminal history who “has committed or been found guilty of committing a felony or an act which does not conform to the accepted standards of the profession.”

The issues at hand on Wednesday extended well beyond concerns over licensure, however, as advocates spoke out against what they call deceptive tactics used by police to illicit confessions. According to the ACLU, police in Connecticut routinely lie to people in their custody, including children, exaggerating or fabricating evidence or lying about potential consequences.

According to the National Registry of Exonerations, 30 people have had their convictions overturned in the Connecticut since 1989. Among them, six included a false confession and 16 included “official misconduct.”

Senate Bill 306 would “make inadmissible statements or admissions obtained through the use of deceptive tactics.” Those tactics, as outlined in the bill, include: depriving the person of food, sleep, or other needs; giving false facts about evidence; using false or misleading promises of leniency; using false statements or misrepresentations of the law; threating physical force; threating to prosecute another person; threatening increased penalties; or violates their civil rights, among others.

Also on the docket for the day was the issue of solitary confinement. The PROTECT Act, which is making its way through the state legislature for the second time, is an effort to abolish the use of solitary confinement in the state. The act was passed through the General Assembly in 2021 but was vetoed by Governor Ned Lamont in favor of an executive order instead. This time, proponents say the governor has promised he will sign the bill if it reaches his desk again.

“I’ve made it clear from the very beginning when we were negotiating with the Department of Corrections that this is just the beginning,” Barbara Fair of Stop Solitary CT told the crowd. “We have a lot of work to do, but this is a first step.”

According to Stop Solitary CT, the bill would bring the state in line with the United Nations Mandela Rules, which promote “humane conditions of imprisonment.” The rules are named after former South African president Nelson Mandela, who spent decades in prison for his opposition to the country’s apartheid laws.

Each of these bills has been passed through their respective committees but have not yet come up for a vote on the floor.

An Emmy and AP award-winning journalist, Tricia has spent more than a decade working in digital and broadcast media. She has covered everything from government corruption to science and space to entertainment and is always looking for new and interesting stories to tell. She believes in the power of journalism to affect change and to change minds and wants to hear from you about the stories you think about being overlooked.
Email Author
More by Author
Twitter
ProtonMail
«Previous Post
Push to ban captive audience meetings in Connecticut gets boost from National Labor Relations Board General Counsel»Next Post
When government help falls short for Bridgeport restaurant owner, private sector steps up