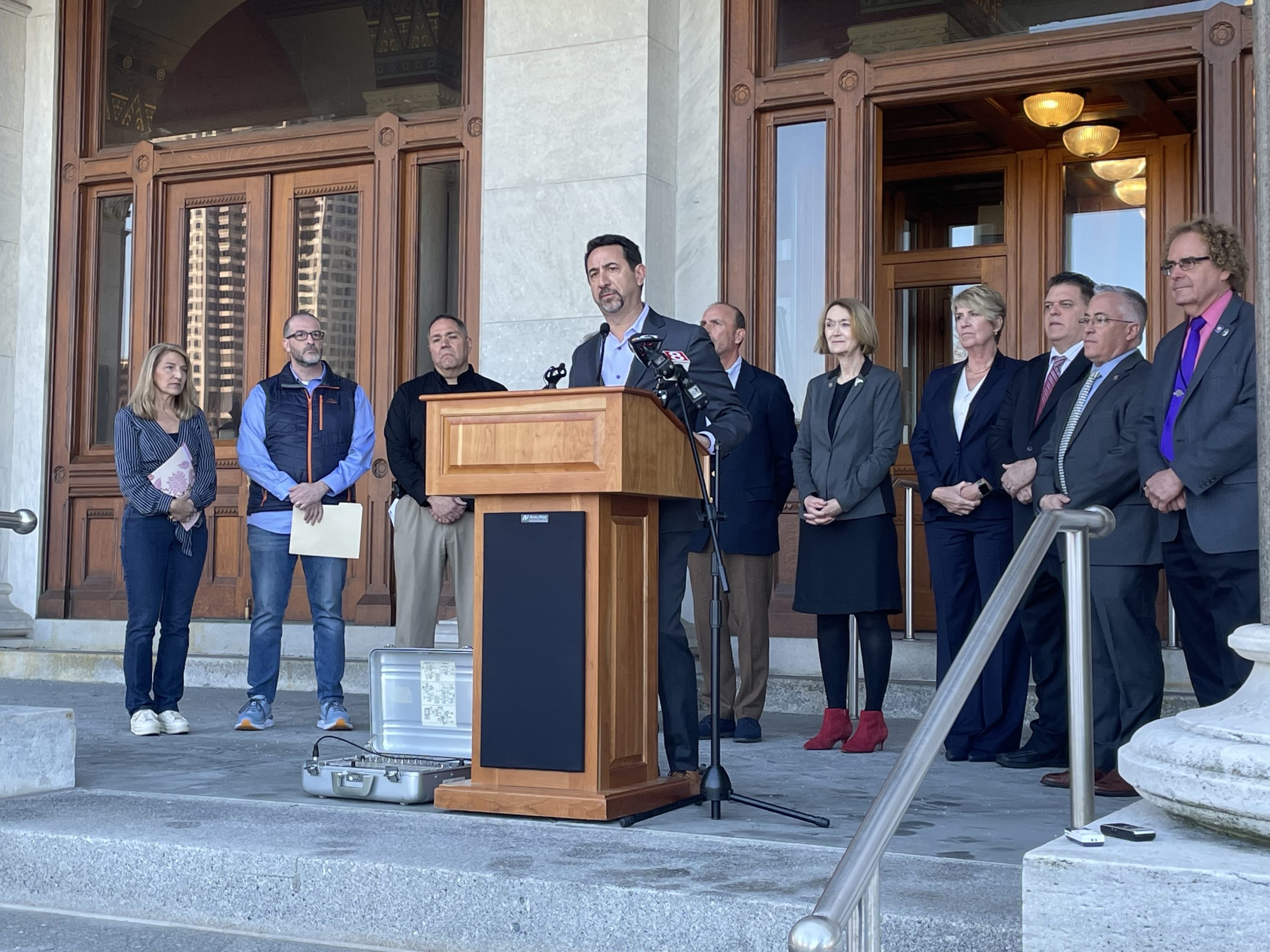 Business leaders joined Republicans on the north steps of the Capitol Building on Business Day to call on Gov. Ned Lamont to use $400 million in remaining federal COVID-relief money to pay off Connecticut’s unemployment trust fund debt.

“Our businesses face a 22 percent tax increase over the next four years to pay back the money borrowed from the federal government,” said President of the Connecticut Business and Industry Association Chris DiPentima. “Our businesses could be using this money to address the rising inflation costs and the workforce crisis we face here in Connecticut.”

Connecticut’s entered into the pandemic with roughly half the funds necessary to withstand a recession. The nature of the pandemic, however, combined with government-imposed closure of businesses resulted in an unprecedented surge of unemployment payments to those who suddenly found themselves out of work.

To meet demand, the state borrowed $888 million from the federal government. To date, the state has paid back $425 million, leaving Connecticut businesses potentially on the hook for the remaining $463 million, which would be paid back through higher unemployment taxes.

During the 2008 recession, Connecticut also borrowed money from the federal government to bolster its unemployment trust fund and businesses spent the next six years paying off the debt during a time in Connecticut’s economy that was marked by sluggish economic growth.

Carmen Romeo, owner of Fascia’s Chocolates in Waterbury, said his business did not lay off a single employee during the pandemic and has actually never laid off anyone during his 12 years in business.

“The majority of businesses in this state are small businesses like Fascia’s Chocolates and we’ve done everything to keep our employees working,” Romeo said. “Our elected leaders need to do the right thing and take this $463 million burden off small businesses by using the money we were given by the federal government for that purpose.”

CBIA estimates that paying off the federal debt will drive the unemployment insurance cost for businesses from an average of $542 per employee per year to $661 per employee by 2026, a 22 percent increase.

“For many restaurants across Connecticut, I worry whether these costs will be the straw that broke the camel’s back,” said Keith Beaulieu, owner of The Main Pub in Manchester. “Our state’s restaurant industry lost over 600 restaurants during the course of the pandemic, how many more will we lose if this state fails to fix the UI trust fund?”

House Republican Leader and business owner Vincent Candelora, R-North Haven, said it was “frustrating” to hear from business owners who are concerned about maintaining jobs and workforce in Connecticut.

“At the same time our legislature and the governor talks about a $3.5 billion surplus, $4 billion of ARPA money, upwards of $5 billion in infrastructure money coming into the state of Connecticut, yet our government has only been willing to pay back $150 million of a debt that was created by this pandemic.”

Gov. Lamont held his own press conference online from his home where he is quarantining due to a positive COVID test and addressed the concerns of business leaders, saying that it was a matter of decisions and priorities in the budget.

“We’ve paid down already half of that with some ARPA money and because we have some of the lowest unemployment claims in our history right now, so we were able to do about $250 million just out of organic growth in the unemployment fund, so that’s a very positive thing,” Lamont said. “We’ll see how long that trend continues, 8.5 percent inflation may put a damper on the economy but right now we’re continuing to pay down the unemployment liability.”

“I’ve been slow on this, to be blunt, just because we almost get money for free from the federal government – nothing is free, I get it – but it’s about 1.6 percent in a 8.6 percent inflation environment,” Lamont said. “So, it’s very inexpensive money, so that allows us to borrow to keep this solvent and make all the payments we need.”

“To suggest that our state workers need this money to go into their pension coffers – upward of $2 billion – and we can’t spare $400 million for our businesses to make sure they emerge out of this potential recession, but more importantly out of the current inflation that we’re faced with is very troubling to me,” Candelora said.

Senate Republican Leader Kevin Kelly, R-Stratford, noted Connecticut’s lackluster economic performance and the state’s high tax status. “We have a government that’s putting yet another impediment, another cost on the creation of jobs that puts our families to work,” Kelly said. “And guess what happens? Connecticut remains unaffordable, our families don’t get better jobs and they certainly don’t make more money.”

Connecticut businesses say the state is facing a labor shortage and they are struggling to find and hire workers in the aftermath of the pandemic.

“Today in this state we have 117,000 job openings,” DiPentima said. “Our labor force has declined by nearly 82,000 people since the start of the pandemic.”

Marc worked as an investigative reporter for Yankee Institute and was a 2014 Robert Novak Journalism Fellow. He previously worked in the field of mental health is the author of several books and novels, along with numerous freelance reporting jobs and publications. Marc has a Master of Fine Arts degree from Western Connecticut State University.
Email Author
More by Author
Twitter
ProtonMail
«Previous Post
Data privacy bill passes Judiciary Committee with concerns»Next Post
CT AG joins call to end convenience fees from mortgage servicers