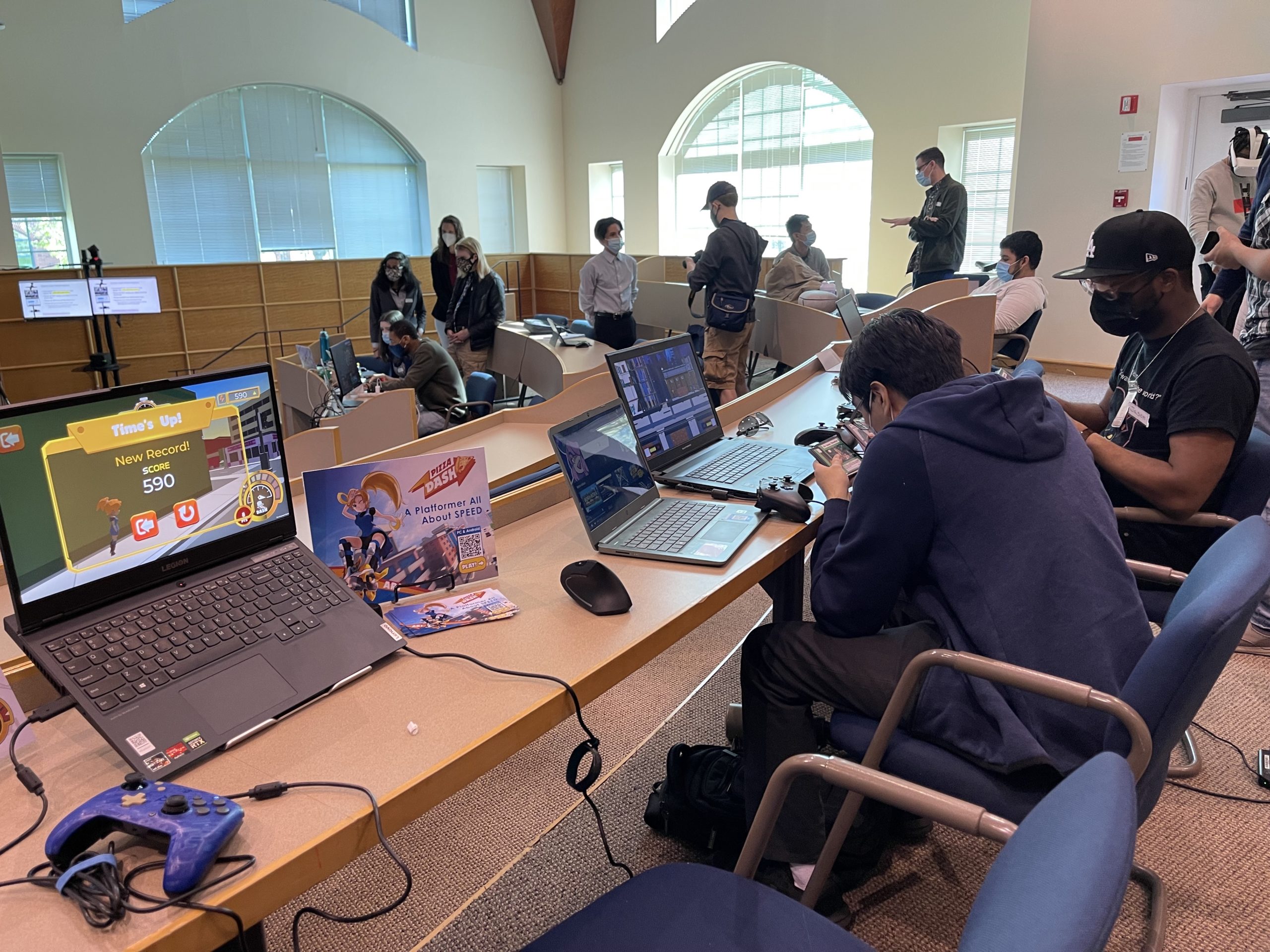 Dozens of teams from across the state came out to pitch their designs to industry professionals.

Video games are a booming industry, thanks, in part, to pandemic isolation forcing people worldwide to find home-bound activities over the last two years. Research predicts that, even if the industry doesn’t continue growing at pandemic rates, it will still reach $219 billion in revenue by 2024. Even so, it’s an industry that Connecticut hasn’t broken into, though not for lack of interest from the community.

The problem, say local experts, is one of access and support. That’s why they started GameDevCT, an organization seeking to build community in Connecticut’s gaming industry. It’s also why more than 30 teams descended on Quinnipiac’s Mount Carmel Auditorium at the end of April (in person and remotely) to pitch their own projects.

“We have a lot of students presenting from UConn, Quinnipiac University,” says Greg Garvey, who founded the Game Design program at QU and serves as a professor. “A lot of them wanna stay here, and they’re producing games every year. We graduate people that have excellent working prototypes and games that could easily be established as companies here.”

But that’s not usually what happens when students complete their degrees. Many move out of state to join established firms in places like New York, Boston, and Los Angeles. But Garvey says the industry is extremely competitive, and it can be difficult for new professionals to break in. According to Bernard Francois, founder of PreviewLabs, sometimes starting your own company and launching your own game can be exactly the proving ground a new developer needs to prove (and improve) their skills in the marketplace.

“Even if they don’t commercially make it, they gain very valuable the experience that they can use,” he explains. “So I think we have to grow maybe a grassroots kind of ecosystem, like from the ground up, starting with the students.”

“The students that I teach, they are begging to stay here and they’re wanting those opportunities,” says Ken Thompson, a game developer and faculty member at UCONN. “And several of them have. We have game developers here today who are working on large indie titles and they’re in online teams with staff in California and Texas, and that’s the new world and that’s how game development works. We’re very able to collaborate across the internet.”

Titles entered into the competition ran the gamut, from beautifully rendered platformers built by small local companies to early prototypes developed in spare time between classes. They were console titles and card games and were driven by both deep narratives or the simple goal to shoot your opponent before they shot you. Some had lofty metaphors about trauma or climate change, while others stressed teamwork or education. One just wanted you to deliver a pizza before being eaten by zombies. Several sought to innovate into new and emerging technologies like virtual reality. All of them wanted to build a game here in Connecticut.

“Part of our pitch is we want to stay in Connecticut,” says Tyler, the narrative designer for Trewel Towers, a VR tower defense game. “We want to start a company and stuff, but we know how hard it is to start a company. Like 50% of businesses fail in the first year. So if we do well in this competition, it’s a sign that we should do this, cause there aren’t a lot of game companies in Connecticut that aren’t one or two people.”

Trewel Towers is one of those student projects, a prototype game built by four Quinnipiac juniors in what time they’ve had between other work and classes. They say the competition has proved a major motivator for them to push forward on the game, and develop a proper pitch and website. They’re hoping the exposure they get from the presentation will help them make contacts to develop it further, maybe find voice actors rather than doing it all themselves.

“Part of the role of GameDevCT is to let developers and the community know about one another,” says Garvey. “And there’s important reasons to do that, partly because people can share resources, talent, and so forth. I think we’re playing a really critical role in helping establish the industry here in Connecticut.”

The prize money is also a motivator. GameDevCT partnered with the Entrepreneurship Foundation who provided $10,000 in prize money which was awarded at the end of the weekend to several of the games. The $5,000 Grand Prize went to Wonder Ring Interactive and their gorgeous 2D co-op platformer Fragments, which requires players to pass abilities between them to solve puzzles and beat levels.

The Trewel Towers team did not walk away with a prize of their own, though the team was almost never without someone visiting their station to learn more and play their demo. They all still have a year left in school and plan to work on the project as part of their senior capstone so the future remains wide open.

Meanwhile, the same can be said for Connecticut’s own gaming future.

“There’s so many different ways that people can get into the game industry and start a company,” says Francois. “And it’s kind of leveraging all of that and encouraging the whole ecosystem and the state.”“It just takes one brave person here to start their company,” says Thompson. “And if they make it, then it’s gonna hopefully help everyone else.”

An Emmy and AP award-winning journalist, Tricia has spent more than a decade working in digital and broadcast media. She has covered everything from government corruption to science and space to entertainment and is always looking for new and interesting stories to tell. She believes in the power of journalism to affect change and to change minds and wants to hear from you about the stories you think about being overlooked.
Email Author
More by Author
Twitter
ProtonMail
«Previous Post
Senate passes bill aimed at harsher punishments for children accused of crimes»Next Post
UConn Professor Guilty of Sexual Misconduct Collects State Benefits