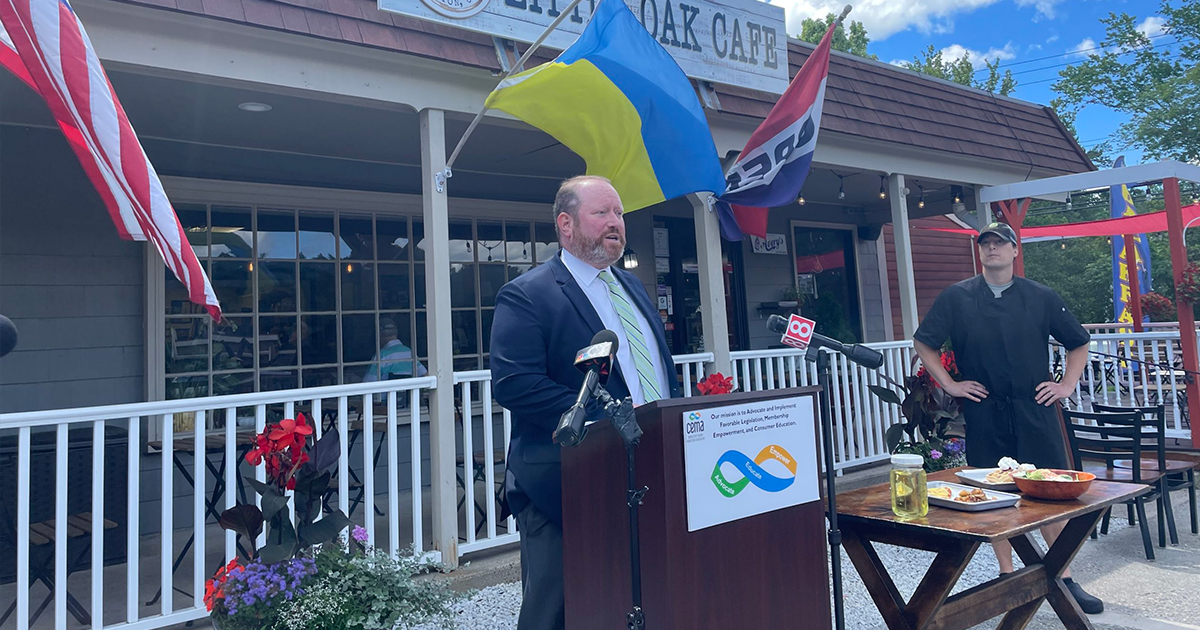 Standing outside the Little Oak Café in Canton, President of the Connecticut Energy Marketers Association Chris Herb says a law passed by the General Assembly in 2021 that takes effect July 1 will help Connecticut reduce greenhouse gas emissions from home heating oil while simultaneously generating a little extra revenue for restaurants.

“This July first is Connecticut’s first step toward independence from foreign oil with the enactment of this law,” Herb said, thanking a bipartisan group of lawmakers who pushed for passage of the bill. “The majority of biodiesel made here in Connecticut and consumed by their customers comes from restaurants.”

According to David Borselle, owner of the Little Oak Café, restaurant owners previously had to pay 20-30 cents per gallon to dispose of their used cooking oil. Now they are paid the same rate by biodiesel companies to haul away their old cooking oil.

“It’s a win-win for everybody,” Borselle said. “It’s good for the company and it’s good for us. It’s important that we are not wasting anything and keeping this used cooking grease out of the water and landfills.”

Under the law, Connecticut will gradually increase the biodiesel blend into home heating oil, starting this year with 5 percent and rising to 50 percent by 2035. The change will take place automatically and does not require home heating oil consumers to do anything at all.

According to the National Biodiesel Board, using a 50 percent biodiesel blend can reduce greenhouse gas emissions from home heating oil by 40 percent, helping Connecticut reach its stated emission reduction goals.

Stephen H. Sack, Jr. owner of West Hartford-based Sack Energy is one of the largest biodiesel distributors in Southern New England and said he is pleased they can offer a carbon-reducing fuel to Connecticut residents.

Herb says this law and the biodiesel blend is something Connecticut is doing that will have immediate effects beginning next month, as opposed to spending hundreds of millions trying to develop a wind farm in the future.

“The State of Connecticut is immensely concerned about environmental justice communities, low and middle income people, this fuel delivers, no cost with all the environmental benefits,” Herb said. “This fuel starts reducing emissions today, which will have a compounding factor. As the state wants to spend billions of dollars of ratepayer money to try to get to net zero emissions electric grid, we are going to deliver these benefits today.”

Although biodiesel offers a cleaner home heating oil fuel, Herb says environmental groups have been slow or unwilling to throw their support behind it. Herb speculated that environmental activists want to avoid burning any kind of fuel for energy and are likely concerned that maintaining a fossil fuel infrastructure will maintain a dependence on oil.

The Sierra Club, one of the foremost environmental activist organizations in the country, supported the use of cooking oils for biodiesel and said that other sources of biodiesel from crops should be evaluated based on their environmental impacts.

According to the Sierra Club’s 2015 guidance on biofuels: “Sierra Club supports the manufacture of biodiesel fuels derived from the re-use of cooking oils. Crop-based biodiesel projects must be evaluated based on overall greenhouse gas savings, impacts on local sustainable agriculture, food production needs, and all environmental impacts including GMOs.”

Testifying on the bill in 2021, Samantha Dynowski, president of the Connecticut Chapter of the Sierra Club, said Connecticut should instead be incentivizing people and businesses to move away from fossil fuels altogether.

“Connecticut’s Comprehensive Energy Strategy should be focusing instead on how to quickly ramp up energy efficiency, rapid deployment of electric heat pumps and hot water heaters, and a planning process for an orderly retirement of the gas pipeline system to meet the decarbonization requirements of the GWSA in homes and commercial businesses,” Dynowski wrote in public testimony.

But Herb says Connecticut has to take an “all-fuels” approach to carbon reduction and biodiesel offers a way to start sooner rather than later.

“The State of Connecticut is at a crossroads with its energy policy,” Herb said. “It’s going to take an all-fuel approach to meet the energy demands of the future, not a one-stop, one-shop fits only. We believe that biodiesel and other liquid renewable fuels are part of that. We urge [the Department of Energy and Environmental Protection] and the governor to embrace this law and to exploit it to its fullest extent to support those family businesses and the 13,000 people our industry employs.”

Marc worked as an investigative reporter for Yankee Institute and was a 2014 Robert Novak Journalism Fellow. He previously worked in the field of mental health is the author of several books and novels, along with numerous freelance reporting jobs and publications. Marc has a Master of Fine Arts degree from Western Connecticut State University.
Email Author
More by Author
Twitter
ProtonMail
«Previous Post
Rep. Himes makes pitch for federal digital currency»Next Post
Connecticut’s unemployment rate improves, still above national average