Protesters rally at Capitol to “End Hate Across the State” 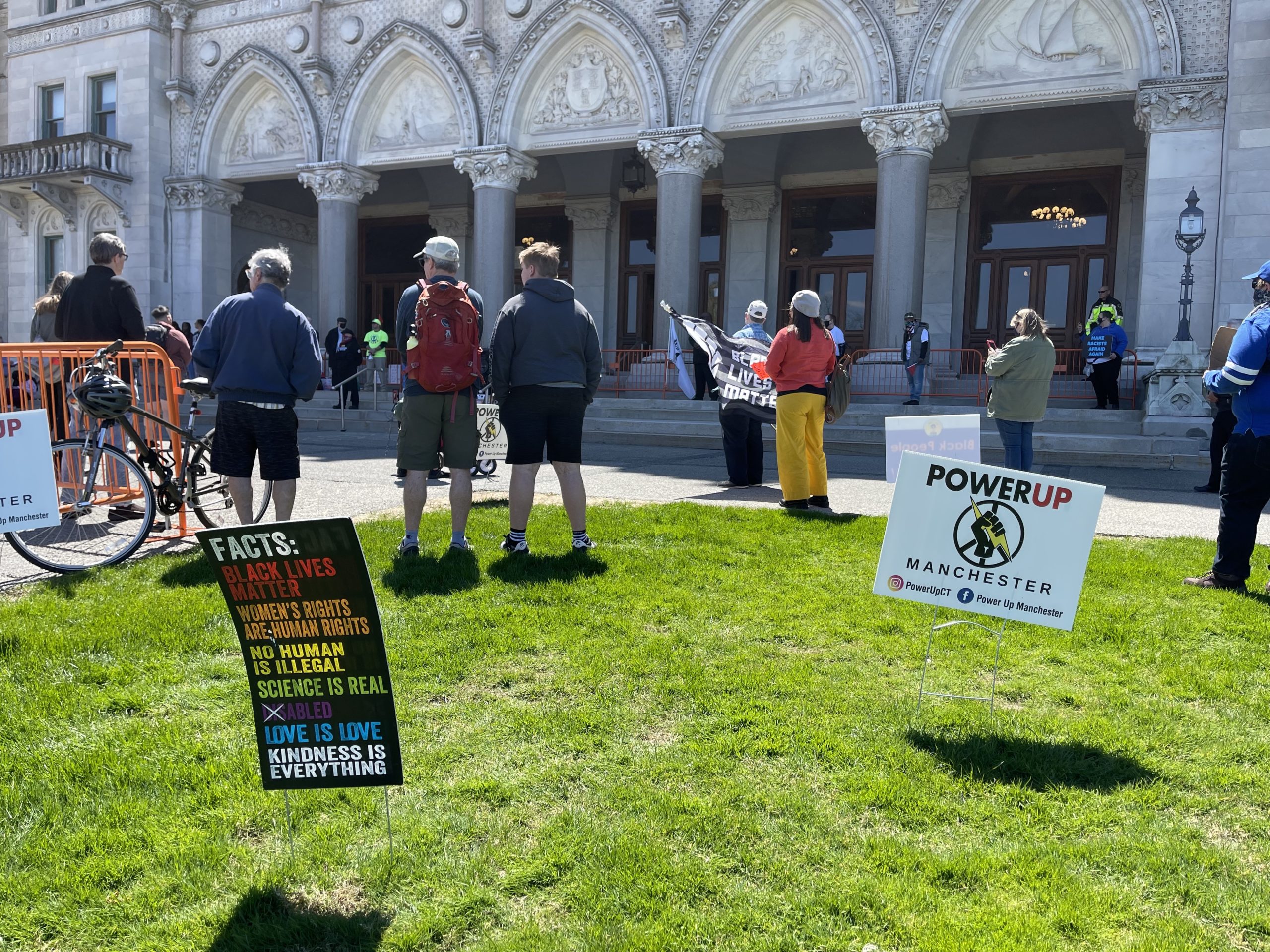 Things started calmly on the steps of the Capitol’s South Lawn in Hartford Saturday morning. Dozens were gathered for an “End Hate Across the State” rally, calling on lawmakers at the state and local level and regular citizens to put an end to racism, sexism, and homophobia in the state of Connecticut.

“When we say End Hate Across the State, we’re talking about everything,” said organizer Keren Prescott of Power Up Manchester as she kicked off the rally. While the goals of the group were broad, the thread that ran through each of the speeches was one demanding justice for victims of hate crimes and calling on Connecticut residents to understand that hate exists even in their own backyards.

The rally came just days after West Hartford Police said they had received reports of fliers from The New England Nationalist Social Club, a neo-nazi group, popping up around town. On Monday, the town announced funding to fight hate crimes in response.

While Saturday’s event remained peaceful, tensions were high. Rumors and social media posts had made their way around the group, alleging that potentially violent white supremacist groups could target the event. A planned Saturday session of the General Assembly was canceled due to safety concerns.

During her opening remarks, Prescott urged those in attendance to avoid directly confronting protesters.

“If you try to go toe-to-toe with one of these people in this freedom convoy, you’re putting black and brown lives at risk,” warned Prescott. “Cause many of y’all who wanna go toe-to-toe and argue back and forth are not gonna throw a punch, and you’re not stand in front of a punch coming my way and I’m pretty sure you’re not gonna stand in front of me and block the spit coming out of their mouth.”

In addition to the increased presence of Capitol Police officers in the area (I counted roughly 5-7 on foot and bicycle, including at least one K-9 unit), the rally had its own security provided by the John Brown Gun Club, a leftist community safety organization, and the Self Defense Brigade, who took up positions on the perimeter and shifted to stand calmly between the opposing protesters.

The initial confrontation between the two groups was tense but civil. As a few men in patriotic garb began to stand at the back of the rally, a handful of attendees and organizers went down to greet them. They spoke for a few moments before shaking hands with them and parting ways.

After about an hour, a group of Freedom Convoy protesters made their way to the back of the building and the speeches were drowned out by shouting from both sides of the lawn. The protesters carried flags and signs protesting the current president and shouted for the rally-goers to end their own intolerance, though intolerance of what was unclear.

“It’s cute to me,” remarked Tre Brown, Vice President of Black Lives Matter 860, when I asked how he felt seeing the rally opposed. “When you see immaturity spewing across this area, it’s funny to me. Because at the end of the day when it’s all said and done, we’re about peace. They’re about war. And we’re not going to stop until Black lives matter.”

An Emmy and AP award-winning journalist, Tricia has spent more than a decade working in digital and broadcast media. She has covered everything from government corruption to science and space to entertainment and is always looking for new and interesting stories to tell. She believes in the power of journalism to affect change and to change minds and wants to hear from you about the stories you think about being overlooked.
Email Author
More by Author
Twitter
ProtonMail
«Previous Post
Unheard Evidence: The Murder of Richard Woods»Next Post
Hartford Inspector General says interview procedures hinder his ability to investigate police complaints