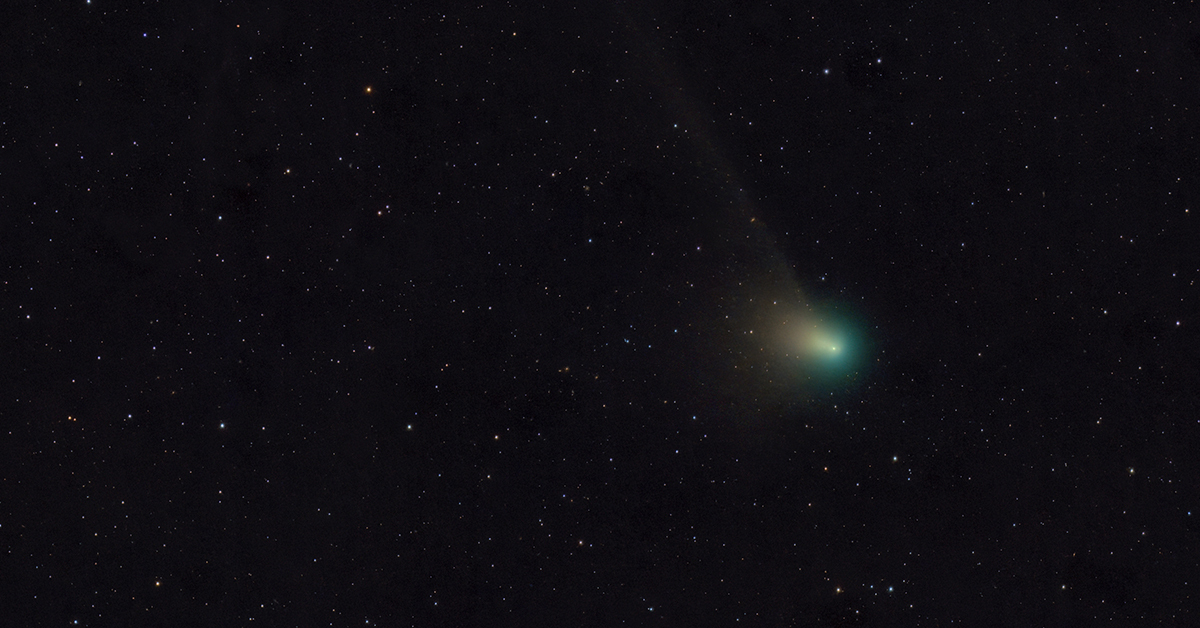 If you’re looking for something unique to do in a couple of weeks – and don’t mind a little cold – there is good news. A rare comet is flying by the Earth for the first time since early man walked the Earth, and likely the last time in history.

“The cool thing about the comet is that — most of the comets that we’ve heard of — these are short-period comments, this one is not,” explains Carol Ives, Director of the Copernican Observatory and Planetarium at Central Connecticut State University. “It has a period — or the time it takes for it to go around the sun — of 50,000 years. That’s a really long time. And so, what that means is this comet is coming from a region way far out in the solar system.”

Comet 2022 E3 was discovered by observers at the Zwicky Transient Facility in California just this past March. Subsequent observations – and a lot of math – helped astronomers determine that this particular comet had such a long orbit that this is the first time it has been charted in the sky. Additionally, the sun’s gravity is likely to have swung it out of its normal orbit, meaning that once it leaves our solar system, it won’t be back.

C/2022 E3 has been making its way toward the Earth for months now and as of this week has finally made its swing around the Sun. That means that it is now (potentially) visible to observers during night hours. On the night of February 1st into February 2nd, it will reach perihelion (its closest approach to the Earth), coming within 26.4 million miles.

At that distance, it could be visible with the naked eye – as long as you can get somewhere dark enough.

“This thing is really not predicted to get really bright,” says Dr. Ives. It’s only predicted to reach what is called 5th Magnitude brightness, just slightly brighter than the dimmest stars visible during the darkest nights. Plus, the comet will be fighting the brightness of a waxing moon.

Still, with clear weather and dark enough skies, you stand a good chance of catching a glimpse of this unique celestial visitor. Ives recommends heading away from the highways to find the darkest areas of the state (but check to make sure you’re allowed to be there) and to increase your chances with the right tools.

“You don’t really need a telescope if it’s bright enough, but a pair of binoculars will really, really help,” she advises.

You’ll also need to know where to look, so it’s time to bust out your grade school astronomy knowledge – or a good star map app — and look for the Big Dipper.

“You’re going to look towards the Big dipper and the Little Dipper, and it’ll be in between the two of those,” says Ives. “Just look for it with a naked eye first. If you can’t, then take binoculars out and sweep it by the Big Dipper towards Polaris and see if you can find it.”

Comets are sometimes referred to by astronomers as “dirty snowballs” because they are made up, not of rock, but of frozen dust and gases. As the comet gets closer to the sun, those gases start to melt leaving a coma – or a trail of debris — streaming behind. Fun Fact: Every year, the Earth’s orbit moves through the debris fields left behind by several other comets, resulting in meteor showers.

C/2022 E3’s coma is unique and rare for one very specific reason.

“This comet is green. It’s really omitting a very unique green color, and that’s a bit unusual,” says Ives. “The nature of that is due to diatomic carbon molecules. So instead of there being just one carbon, there are two together, and when those carbon molecules start to decay, they admit energy and green lights.”

If you want to try to see the comet for yourself, you can start looking right away. Some observers report being able to see it in the sky this week and this weekend’s New Moon will mean the darkest possible skies. The comet should be visible through February but remember that the moon, cloud cover, and the brightness of the comet itself will affect how easy it will be to see.

An Emmy and AP award-winning journalist, Tricia has spent more than a decade working in digital and broadcast media. She has covered everything from government corruption to science and space to entertainment and is always looking for new and interesting stories to tell. She believes in the power of journalism to affect change and to change minds and wants to hear from you about the stories you think about being overlooked.
Email Author
More by Author
Twitter
ProtonMail
«Previous Post
Secretary of the State Thomas presents early voting recommendations»Next Post
Zoning In: When Affordable Housing Came to Brookfield