SEBAC agreement to cost nearly $1.9 billion, according to Office of Fiscal Analysis 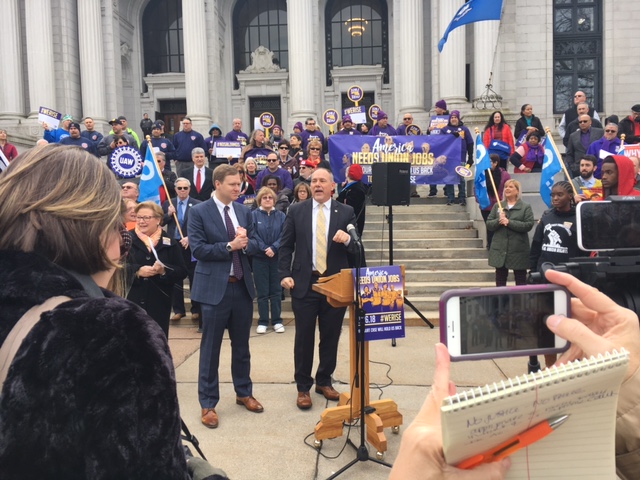 The Appropriations Collective Bargaining Subcommittee met on Thursday to discuss the collective bargaining agreement that has been struck between the Lamont Administration and the State Employees Bargaining Agent Coalition (SEBAC). The deal is estimated to cost the state a total of $1.86 billion, including $292.4 million for the current fiscal year.

The agreement applies to the 35 bargaining units that make up SEBAC, which represents over 46,000 state employees.

The deal includes an annual increment and a 2.5 percent general wage increase every year through the term of the agreement, both retroactive to July 2021. The wage increases are projected to cost $85.2 million in 2022, rising to $96.1 million for the state in 2024.

The cost of the agreement may require Connecticut to draw down $300 million from its reserve fund.

However, due to the pending deluge of retirements on the horizon, the projections might be overstating what the actual costs may be, according to Chris Perillo, Section Chief of the Office of Fiscal Analysis.

With more senior employees that earn higher wages retiring, the state may spend less money by bringing in younger, less experienced employees who won’t initially earn as much as their predecessors.

“So someone making $150,000 is going to come off the books and there will be some attrition and turnover savings when we finally rehire that [position],” Perillo said. “The new employee would not be coming in at that $150,000 [salary].”

The raises and bonuses are part of a goal to reward state employees for their work over the course of the COVID-19 pandemic and also to attract new hires with the coming wave of retirement threatening to severely impact the State’s workforce, according to a press release from the Governor’s office.

“This agreement provides a clear message to our state employees that we value their contributions to our residents while also providing a solid platform from which to recruit the next generation of public servants to our ranks,” Gov. Lamont said in a statement.

In an April 1, press release, SEBAC called the agreement “historic.”

“It is a vital step in resolving the current staffing crisis that is the consequence of decades of disinvestment and austerity,” SEBAC wrote. “Since the Great Recession, the state’s workforce has shrunk by more than 20%, not including the thousands more expected to retire by July 1. This agreement is a much-needed investment in funding Connecticut’s future.”

The agreement with SEBAC will have to be voted on by the General Assembly, with Republican’s saying the price tag is too high and tax relief too little at a time when people are facing high inflation costs.

“Connecticut is already unaffordable for working- and middle-class families, and inflation is only making things worse,” Senate Republican Leader Kevin Kelly, R-Stratford, and Sen. Paul Formica, R-East Lyme, said in a statement. “Yet instead of a conversation on how we can use $1.8 billion to provide relief to every family – state workers included – CT Democrats are keeping these dollars for government itself. Meanwhile, Connecticut families are the ones making the sacrifice to pay government.”

“When the average Connecticut resident who’s been struggling under the growing weight of runaway inflation sees the details of this agreement, in particular the outrageous bonuses, I have little doubt that they’ll view this as yet another example of state government working to feed itself,” Candelora said.

A national, award-winning journalist from Bristol, Tom has a passion for writing. Prior to joining CII, he worked in print, television, and as a freelance journalist. He has taken deep dives into sexual assault allegations by Connecticut professors, uncovered issues at state-run prisons, and covered evictions in the New Britain Herald. He chose to focus on issues based in Connecticut because this is his home, and this is where he wants his work to make the greatest impact.
Email Author
More by Author
Twitter
ProtonMail
«Previous Post
Grievance shows multiple failures to report abuse at Whiting Forensic Hospital»Next Post
Advocates, lawmakers push for “Fair Work Week” bill at Capitol