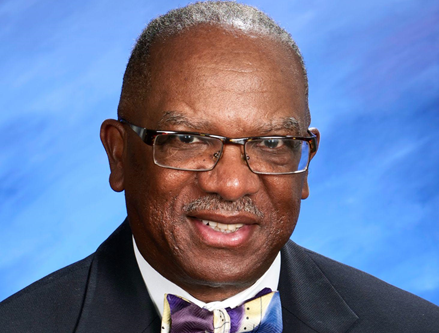 Ulysses B. Hammond has been appointed the interim director of the Connecticut Port Authority.

The board of the Connecticut Port Authority (CPA) voted unanimously to appoint Ulysses B. Hammond as interim Executive Director. Hammond will take over for outgoing Executive Director John Henshaw in May while the board searches for a permanent replacement.

Hammond most recently served as an administrator at Connecticut College (since retired) and has served as a member of the board for the Chelsea Groton Bank, the Connecticut Mirror (board chair), and the Innovation Center of the Chamber of Commerce of Eastern Connecticut (co-chair).

“We’re very lucky to have identified someone who is interested and has the skill set, very well if not perfectly suited to help us through this transition period as we launch a search for our next permanent executive director,” said CPA board chair David Kooris during the Tuesday meeting.

Kooris cites his record with finance, human resources, and capital projects as chief reasons for his candidacy. Hammond’s contract will be equivalent to Henshaw’s, making $200,000 per year with benefits, though his contract is as an at-will employee.

Hammond will be taking over the position in the midst of the $235.5 million State Pier project which is set to complete in just under a year. During the meeting, Hammond applauded his predecessor for his work on the contracting for the pier project and said he is ready and energized for its future.

The project has garnered plenty of scrutiny for the Port Authority as the price tag continues to rise. Henshaw, however, told CII in a previous interview that he doesn’t anticipate any additional major expenses with the project.

The CPA has also had its fair share of internal controversy over the last several years. A scandal involving questionable purchases and improperly reported expenses resulted in Gov. Lamont placing the Office of Policy Management in charge of financial dealings in the department in 2019. This action was further complicated by the recent federal investigation into former OPM Deputy Secretary Kosta Diamantis.

Meanwhile, Hammond faced his own issues while the Executive Officer of the D.C. Superior Court, ultimately leaving the position in 2000 after serving for more than a decade. When asked whether the reasons for his departure might have any bearing on his ability to serve in this role at the Port Authority, Hammond pointed to the more than two decades of experience he has had since.

“All I can say about the over 22-year-old article is that this was vetted by my previous employer as a one-time political back and forth between the court and the Hill where no wrongdoing was found on my part,” said Hammond in a statement to CII. “It has had absolutely no impact on my stellar career and extensive community service and contributions.”

“Over the two decades following the period in the referenced article, Mr. Hammond has a demonstrated track record of executive experience managing and leading public and private institutions,” said Kooris in his own statement. “His experience and qualifications position him perfectly to lead the Authority during this critical transition period.”

Hammond will work with Henshaw in the interim before he takes over completely in May. The Port Authority says they hope to fill the position permanently later this year.

An Emmy and AP award-winning journalist, Tricia has spent more than a decade working in digital and broadcast media. She has covered everything from government corruption to science and space to entertainment and is always looking for new and interesting stories to tell. She believes in the power of journalism to affect change and to change minds and wants to hear from you about the stories you think about being overlooked.
Email Author
More by Author
Twitter
ProtonMail
«Previous Post
State Trooper facing manslaughter charges in 2020 shooting death of Mubarak Soulemane»Next Post
Not legal enough: Activists call for more freedom in Connecticut cannabis laws