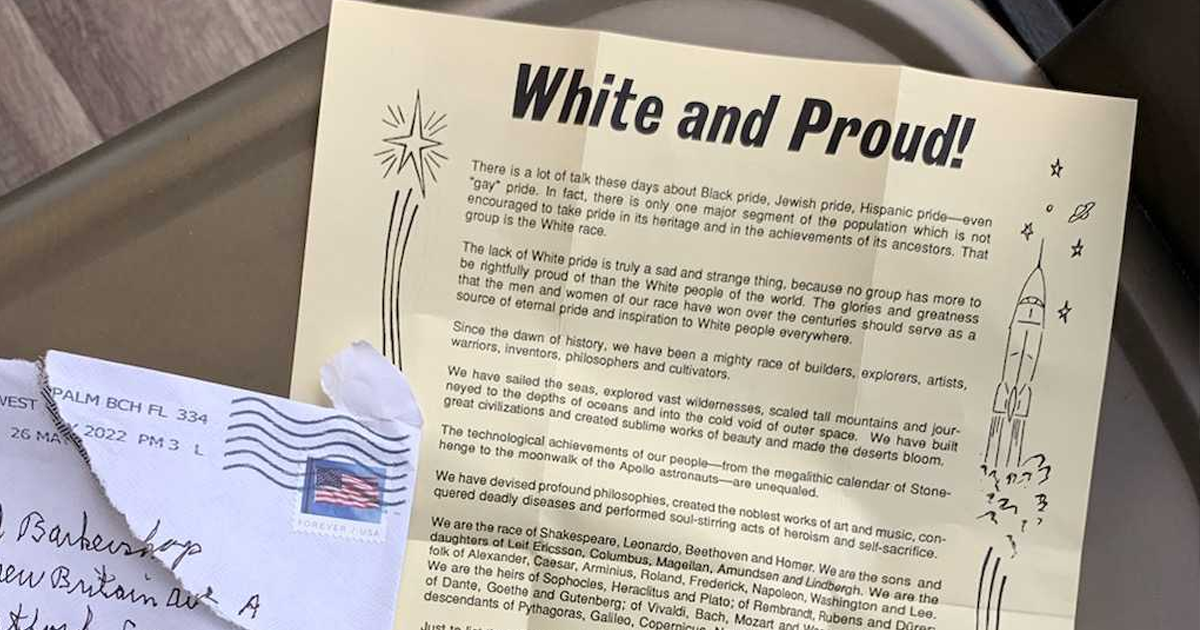 Connecticut has apparently been marked as fertile ground for expansion by fascist groups like the New England Nationalist Social Club to recruit new blood. Within the last few months, flyers from the group have been found in Manchester, East Hartford, Southington, and, most recently, Bristol.

But, there appears to be a new player vying for recruits in the area and has been targeting barbershops in the West Hartford area. A group called New Order, based out of Milwaukee, Wisconsin sent out hand-addressed envelopes containing the same letter titled “White and Proud!” Every barber shop contacted by CII said they received the same letter within the last two to three weeks.

Elmwood Barbershop was one of the first shops to receive the letter and provided CII with a photo of it. Though the return address is listed as a P.O. Box in Milwaukee, the envelope is postmarked from West Palm Beach, Florida.

Being targeted by a racist hate group has left the barbers in the area scratching their heads.

“[The other barbers] are just as confused as us,” Mitch Westcott, co-owner of Elmwood Barbershop, said. “Everyone I know is multicultural, rural barbershops that cut White, Black, Brown [hair], you know, there’s no difference there. We’re cutting in West Hartford because we’re more liberal people.”

After opening the letter and realizing what it was, Westcott tracked down the mailman who delivered it. The mailman brought the letter back to the post office and submitted it to the postmaster, according to Westcott. The West Hartford police also reached out to Westcott about the letter.

The letter contains the typical white supremacist tropes about how other groups such as Blacks, Hispanics and LGBTQ folks are encouraged to take pride in who they are, but Caucasians are not. It then descends into taking pride in the achievements of historical White figures. The writer lists names like Shakespeare, Mozart and Columbus as examples of the people throughout history that have embodied the supposed superiority of the white race.

Westcott, for one, isn’t surprised by the recent string of white supremacist actions across the state. To him, it’s just a sign of the times we’re living in and people ought to be prepared for more aggressive actions by hate groups.

“America is in a state of decline, everyone wants to blame everyone else, so you get all these assholes coming out of the woodwork thinking they can voice their opinions and they’re not going to get noticed and they’re going to find like-minded people to get together and pretend to be the Klan,” Westcott said. “I’m former military, regular people, buy a gun, get trained up. These are just signs that if people overlook they’re going to be hurting.”

The Southern Poverty Law Center (SPLC), which tracks hate groups, has identified New Order as a neo-Nazi group. The Milwaukee based group calls members “heirs” of Adolf Hitler who support an all-white society. According to its website, New Order is composed of Aryan people “committed to building a better world for future generations of their race.” It decries “mindless materialism, self-indulgence, drugs, pollution, pornography, race-mixing, filth, chaos and alienation.”

Don’t Speak: Allegations of racism and retaliation at Connecticut DOT

A national, award-winning journalist from Bristol, Tom has a passion for writing. Prior to joining CII, he worked in print, television, and as a freelance journalist. He has taken deep dives into sexual assault allegations by Connecticut professors, uncovered issues at state-run prisons, and covered evictions in the New Britain Herald. He chose to focus on issues based in Connecticut because this is his home, and this is where he wants his work to make the greatest impact.
Email Author
More by Author
Twitter
ProtonMail
«Previous Post
Petition to stop the hiring of “misinformation officer” circulating online»Next Post
Application for restraining order against Rep. Liz Linehan dismissed