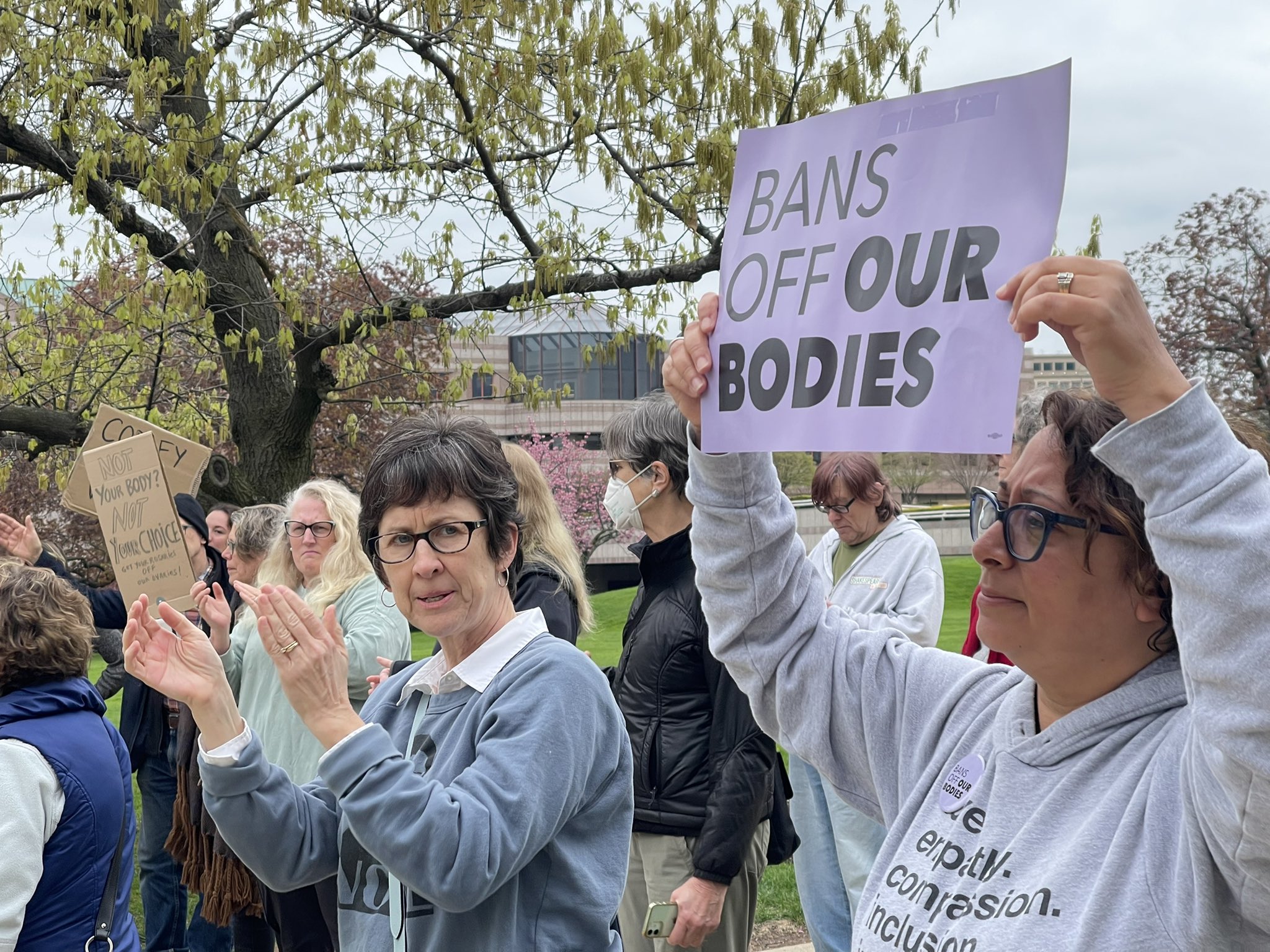 Abortion rights supporters throughout the state came out in numbers on Tuesday to protest the news that the Supreme Court is planning to strike down Roe v. Wade, the landmark decision that legalized abortion nationwide. Late Monday, Politico posted a leaked draft opinion written by Justice Samuel Alito that says the court will be sending the issue back to the states.

The overturning of Roe v. Wade would not immediately affect things here in Connecticut, where abortion access is already codified in state law. Dozens of other states, though, are poised to severely restrict or ban abortions in most or all cases. Even though Connecticut residents won’t see major changes, pro-choice advocates say the issue is bigger than one state.

“I happen to be really really lucky because I have amazing health insurance and really great doctors but others are not as fortunate as I am,” says Anthea Grotton of Ellington. “So while things might not affect me in this moment, that doesn’t mean they don’t affect others … So whether something directly affects me or not I think it is our responsibility to be vocal and to fight for our rights.”

Meanwhile, concerns over the possibility that the Supreme Court could overturn the almost 50-year precedent is what inspired lawmakers to draft HB 5414 which passed through the General Assembly last week. The bill, which is a reaction to Texas-style bans that allow people to sue others they say assisted in another person receiving an abortion, would protect abortion providers from civil or criminal action from people outside the state.

It also expands the types of healthcare providers who can perform certain kinds of early-term abortion procedures. Governor Lamont has pledged to sign the bill when it reaches his desk.

“I am very appreciative to the majority of lawmakers in Connecticut who had the foresight to draft this legislation at a time when the right to a safe and legal abortion in America is in jeopardy,” Governor Lamont said in a statement. “I am proud to stand up for access to reproductive healthcare and reproductive freedom”

“I think it’s great. I think it will protect people from other states who have the resources to get here,” says Sue Henneberry about the bill, though she doesn’t think it will put an end to the issue. “I’m sure Texas is just going to write their own legislation that gives them permission to step over our laws and it’s just going to be a battle of the states.”

“It’s important to protect everyone. Everyone deserves to have equal access and rights to healthcare,” says Grotton. “It’s so distressing to think that there are people that are making decisions about what we do with our bodies.”

The bill still has to go through a number of people in the administration before it gets to the governor. The state of Roe v. Wade, meanwhile, is not set in stone. The draft opinion is not final and could change before the official ruling is released in June or July.

An Emmy and AP award-winning journalist, Tricia has spent more than a decade working in digital and broadcast media. She has covered everything from government corruption to science and space to entertainment and is always looking for new and interesting stories to tell. She believes in the power of journalism to affect change and to change minds and wants to hear from you about the stories you think about being overlooked.
Email Author
More by Author
Twitter
ProtonMail
«Previous Post
Connecticut revenue forecast sees rocky road ahead for Wall Street»Next Post
Despite COVID relief, Connecticut lowest in the nation for per capita federal funding