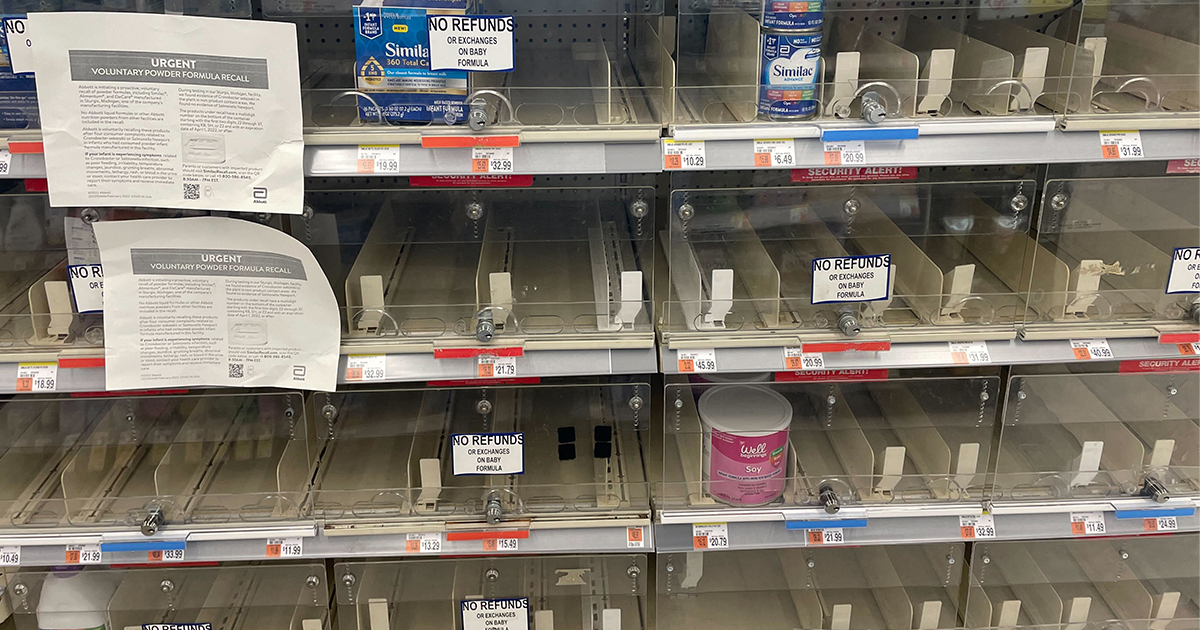 With the country in the throes of a baby formula shortage that has evolved into a full-blown crisis, families in Connecticut search bare shelves desperate to find the nutrition their babies need to survive.

Nationwide, the out-of-stock rate spiked to 40 percent late in April, with several states, including Connecticut, experiencing rates of over 50 percent.

The mass recall of formula by Abbott, manufacturer of Similac, after the death of two infants and the hospitalization of several more due to a bacteria outbreak at its Michigan plant resulting from unsanitary conditions, exacerbated the already existing supply chain issues from the COVID-19 pandemic.

In addition to those factors, strict trade policy in conjunction with just four companies controlling almost 90 percent of the U.S. market, thus magnifying any disruption in production or supply chain, like the Abbott recall, has contributed to the shortage seen today.

Theresa Lopes, a surgical technologist and first-time mother, has friends and family from as far away as Arizona sending her baby formula as shelves in local grocery stores and pharmacies are bare.

Theresa’s baby was born prematurely and spent 2 months in the newborn intensive care unit. Now her baby requires high-calorie baby formula as she remains in the 10th percentile for preemies. Theresa finds herself buying lower-calorie formula and fortifying it when she can.

“I’ve gone all over the state,” Lopez said via Facebook Messenger. “I’ve spent hours on the phone calling around. I’ve found some pre-made formula, but the bottles are less than she takes and if we don’t have powder, we have nothing to fortify it with.”

Adding to her difficulties are rising inflationary costs for both formula and gasoline. “With gas prices, and being out of work right now, I can’t even afford to drive all over,” Theresa said.

Similarly, MariaDelmar Vasquez, a stay-at-home mom caring for foster children, has to use a special hypoallergenic formula for her foster daughter, who is currently a case with the Department of Children and Families.

“My husband and I went to close to 50 stores looking and we couldn’t find it,” MariaDelmar said. “It’s hard to substitute because DCF has guidelines. I’ve had people offer breast milk but obviously, I can’t give a child that is not my breast milk and finding an alternative is hard.”

“When we find a big can we just buy it or I’ve had people find it and buy and then we pay them back,” MariaDelmar said.

A Facebook group, Find My Formula CT, was started as a place for mothers and caregivers to share information on finding the specific formula they need. Members are encouraged to share tips on finding specialty formulas and to let the group know where they’ve been able to find the formula others are looking for.

“I started [Find My Formula CT] because I myself have an almost six-month-old on a specialty formula. It was extremely hard to find on the shelves and the prices were outrageous online,” Rachel Wrightington, the group’s creator, said.

Created late in January the group already has almost 2,000 members. Posts from members range from desperate caregivers seeking help to others posting that they have extra cans to give away to those in need.

“I didn’t think that this group would grow as big as it did, but I am so happy that there are so many people getting the help they need to feed their babies,” Wrightington said.

Wayne Pesce, president of the Connecticut Food Association, said that while grocers are working diligently to find source-safe, approved substitutions to meet the needs of families across the state, trade policy remains a hurdle.

“The U.S. normally produces 98% percent of the infant formula it consumes, and trading partners in Mexico, Chile, Ireland, and the Netherlands are key sources of imports,” Pesce said.

“Given the production and distribution issues leading to local short supplies of infant formula, the FDA is set to outline specific actions it is taking concerning importing infant formula products from abroad. Cutting red tape to get more infant formula to store shelves quicker is paramount to fixing this problem.”

A national, award-winning journalist from Bristol, Tom has a passion for writing. Prior to joining CII, he worked in print, television, and as a freelance journalist. He has taken deep dives into sexual assault allegations by Connecticut professors, uncovered issues at state-run prisons, and covered evictions in the New Britain Herald. He chose to focus on issues based in Connecticut because this is his home, and this is where he wants his work to make the greatest impact.
Email Author
More by Author
Twitter
ProtonMail
«Previous Post
State employee unions may take pandemic pay to arbitration»Next Post
SIDS: Researchers may have found a cause, the next step is proving it