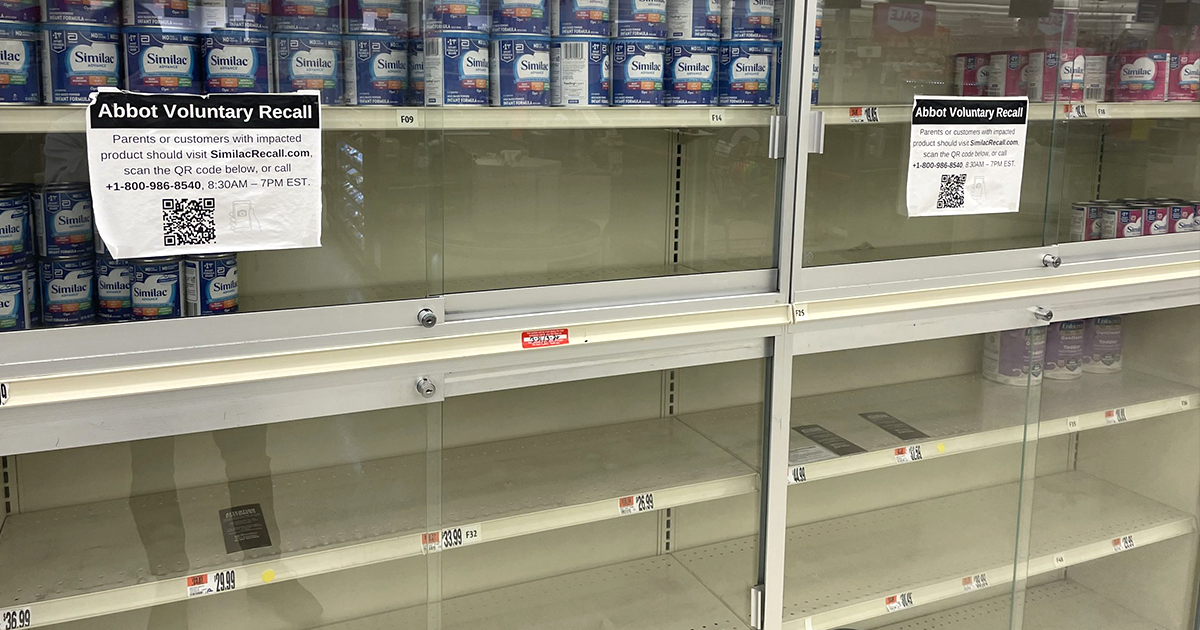 Connecticut’s Women, Infants and Children (WIC) program is especially hard-hit by the on-going baby formula shortage due to a multi-state contract between WIC and Abbott Nutrition, which produces Similac products. Abbott issued a massive formula recall following contamination issues at their factory in Michigan that sickened two infants and caused the death of two others.

During an informational hearing held by the committees on Public Health and Children, lawmakers heard from doctors and some of Connecticut’s congressional delegation about what caused the shortage, how Connecticut families can cope and what could be done a the federal level to increase supply.

“There’s a general feeling of powerlessness, this is not something we can really solve at the state level at the state level,” Rep. Jonathan Steinberg, D-Westport, said. “But I also think it’s important for us to acknowledge the immense stress on families, not that any family needs additional stress at this point.”

Sen. Richard Blumenthal, D-CT, joined the meeting from Washington and said the U.S. should reduce restrictions on importing formula from other countries, noting that four U.S. companies supply more than 90 percent of the country’s formula, including Abbott that accounts for 40 percent of infant formula.

“There need to be tariff adjustments and labeling waivers to permit more imports. Foreign product is as safe as ours, in fact the argument could be made that it’s safer,” Blumenthal said, referencing the contamination at Abbott’s facility. “More imports will increase supply here. Prices have already increased so dramatically that I think the imports will be forthcoming if we open the markets to them.”

Blumenthal also noted that at the federal level, between 50 and 60 percent of infant formula is purchased through the WIC program. WIC contracts with a single formula provider to offer discounts to participants.

“We need to stop sole-source contracting when it increases concentration in industry,” Blumenthal said. “Competition is key to good prices and adequate supply and there needs to be more effective enforcement at the federal level of competition policy that promotes this kind of competition that enables more supply.”

Although Abbott expects to have the factory up and running again within the next two to three weeks, it will likely be at least two months before product begins to hit stores again, leaving families scrambling for dwindling resources over the summer.

Connecticut’s WIC program has obtained waivers to substitute Abbott products for other formulas that are not part of the multi-state contract, including Enfamil, Good Start and Gerber.

The agency is also encouraging caregivers to call them for help with finding formula, check social media groups dedicated to finding formula and purchasing formula online if participants can afford it – but caution against purchasing from foreign countries as the formula is not approved by the Food and Drug Administration.

According to Connecticut’s State Director of WIC Marcia Pessolano, WIC discounts are not available for online purchases as federal regulations require WIC purchases to be made in-person.

The FDA, in conjunction with President Joe Biden’s administration, has moved to allow formula imports from other countries, according to guidance issued this month that allows “enforcement discretion for minor deviations from labeling requirements.”

Wayne Pesce, president of the Connecticut Food Association, told committee members he believes we’ve seen the worst of the shortage and believes the FDA’s move will increase supply in the coming weeks.

The FDA’s announcement, however, received a rebuke from Rep. DeLauro in a press release.

“As I have said before, we cannot make a false choice between safety and supply. I am disappointed that these actions do not do enough to ensure the formula FDA imports is safe for consumers,” DeLauro said. “Instead of purchasing formula from FDA-regulated facilities, the administration is opening the door to any company that self-identifies its formula as ‘safe’. That is unacceptable.”

DeLauro said she would introduce legislation this week aimed at “restoring the domestic supply of infant formula.”

Speakers also addressed the proliferation of formula substitutes, such as homemade formula instructions, that have popped up on social media.

“As many of you have seen, there have been a lot of memes on social media saying ways to possibly feed your baby during the shortage and they can be dangerous, and we’re very concerned about that,” said Rep. Liz Linehan, D-Cheshire.

Doctors and pediatricians speaking at the informational hearing cautioned against using homemade formula recipes found online, substituting formula with animal or plant milk, or experimenting at home as ingredients could become contaminated and lack balanced nutrition leading to potential health situations for infants.

The doctors noted that formula is created to closely mimic breast milk and encouraged those facing difficulties finding formula to reach out to breast milk banks, as the breast milk is screened for anything harmful and are often used for pre-mature babies in newborn intensive care units.

Most importantly, the doctors encouraged parents to reach out to their pediatrician before trying any alternative formulas.

Speakers also warned of online scams and price gouging, particularly online or through private-party purchases. There have been no accusations of price gouging in Connecticut thus far, according to the informational hearing.

Marc worked as an investigative reporter for Yankee Institute and was a 2014 Robert Novak Journalism Fellow. He previously worked in the field of mental health is the author of several books and novels, along with numerous freelance reporting jobs and publications. Marc has a Master of Fine Arts degree from Western Connecticut State University.
Email Author
More by Author
Twitter
ProtonMail
«Previous Post
City of West Haven placed under strictest level of state control»Next Post
CT hourly wages best national average, still fall to inflation