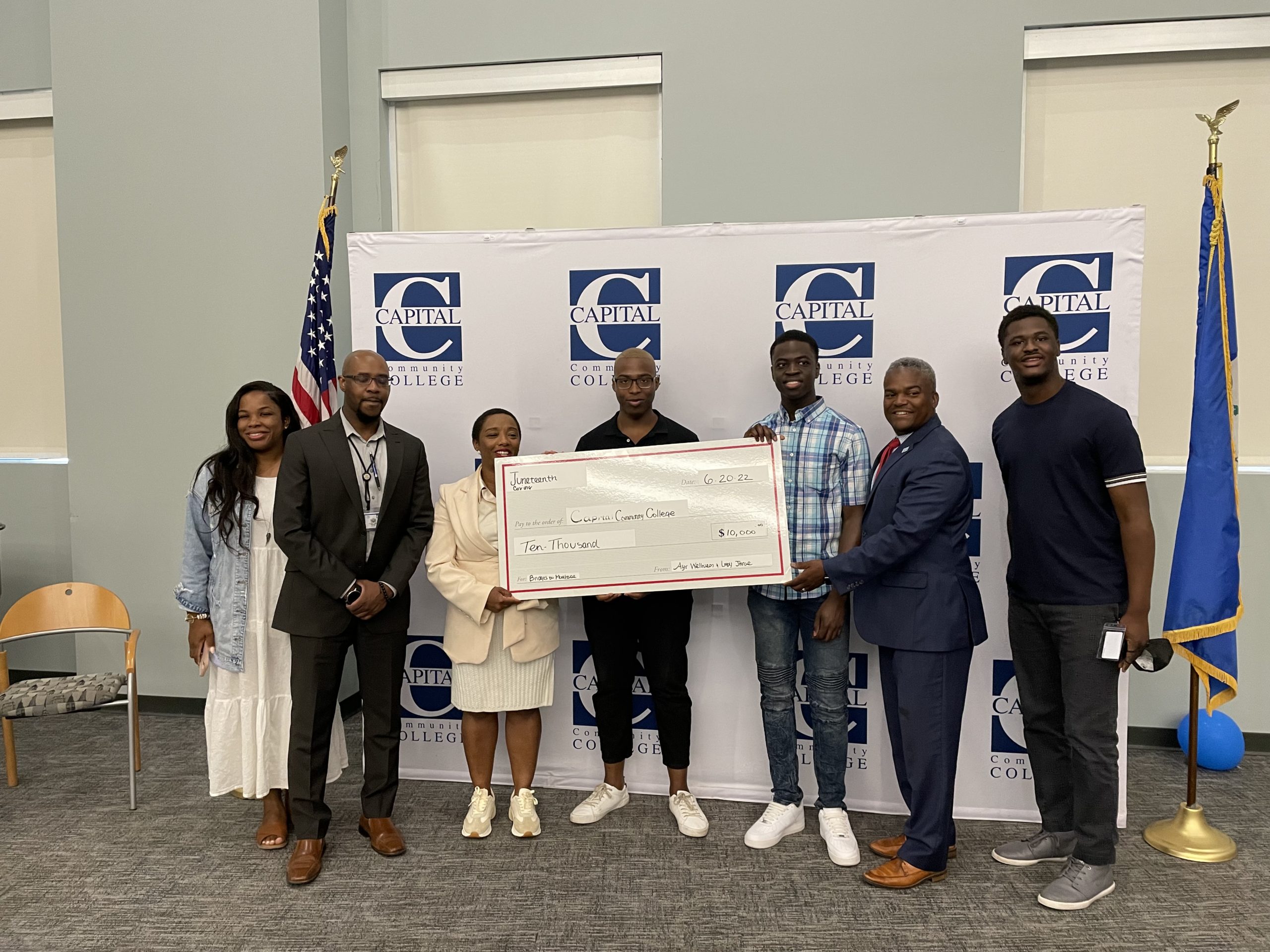 Capital Community College (CCC) in Hartford is launching a new program called Bridge to Morehouse in partnership with Morehouse College, the historically Black college in Atlanta that counts the Rev. Martin Luther King Jr. as one of their many distinguished alumni, and they just received a generous donation, courtesy of two cannabis companies.

Ayr Wellness and Lady Jane, two cannabis companies vying for state licenses, teamed up to donate $10,000 to the program, which allows students who graduate CCC with a minimum 2.7 GPA to seamlessly transfer to Morehouse College as juniors to complete their four-year college education.

“It is truly an honor to partner with Ayr Wellness for their Juneteenth giving initiative, recognizing the amazing work that is being done here at Capital Community College,” said Hartford City Councilwoman and founder of Lady Jane Tiana Hercules during a presentation ceremony on Monday.

Hercules said she was excited the Bridge to Morehouse program will allow students to attend one of the most prestigious Black colleges in the country without accumulating student loan debt for their first two years through the Pledge to Advance CT program (PACT), which provides tuition at Connecticut’s community colleges for Connecticut students.

“We are a majority-minority institution, we’re actually 36 percent Black and 32 percent Hispanic, which makes us one of the most diverse community colleges in New England,” said CEO of Capital Community College Duncan Harris.

“We knew that Morehouse… produces higher rates of doctors and lawyers and business owners and is recognized internationally as a watering-hole for Black male scholarship and we wanted to tether our institution to Morehouse,” Harris said.

Students who enroll in the Bridge to Morehouse Program will be placed in a cohort more specially designed for transfer to Morehouse, including mentors and supports along the way. The program was made official in February of 2022 with the signing of a transfer agreement between CCC and Morehouse.

Harris says the program is launching this fall with 10-15 students and that Connecticut’s PACT program will be especially beneficial for Bridge to Morehouse participants. Tuition for Morehouse is roughly $40,000 per year, so attending CCC for the first two years using the PACT program saves students $80,000 in tuition costs.

Amir Johnson is a 23-year-old Hartford resident who transferred from the University of St. Joseph to Morehouse two years ago, where he is now a rising senior majoring in political science. Johnson says Morehouse’s mission to “lead lives of leadership and service” drew him to the college.

“My experience has been great,” Johnson said. “I think Morehouse has really shown me the path I want to go into and having brothers there who are also interested in pushing me toward my goals and aspirations. I think the professors, too, are awesome, the connections that they have and also what they teach us in class every single day. It pushes us further to be change agents, people who are leading lives of leadership and service.”

Harris said the donation will be used to support Bridge to Morehouse students, including bringing them to Atlanta so they can see the college, sit in some classes, and explore the campus while they are completing their studies at CCC.

Hercules says the donation provided by cannabis entrepreneurs feeds into the larger goal of supporting communities that were disproportionately harmed by the criminalization of cannabis and the War on Drugs.

“It is overwhelmingly and disproportionately people of color, Black Americans particularly, incarcerated at staggering rates, ripped from the community and so many opportunities just ravaged as a result,” Hercules said. “And so, it’s my responsibility as a Black woman in this space to, as much as possible, restore what was taken by the War on Drugs by leveraging the profits of the cannabis industry to benefit our communities directly.”

Hercules said she hopes to spearhead more initiatives and begin a partnership of giving to Capital Community College.

Marc worked as an investigative reporter for Yankee Institute and was a 2014 Robert Novak Journalism Fellow. He previously worked in the field of mental health is the author of several books and novels, along with numerous freelance reporting jobs and publications. Marc has a Master of Fine Arts degree from Western Connecticut State University.
Email Author
More by Author
Twitter
ProtonMail
«Previous Post
Appeal filed in ballot access lawsuit, Hrezi campaign files injunction»Next Post
Report shows racial and ethnic disparities in earnings and education across Connecticut