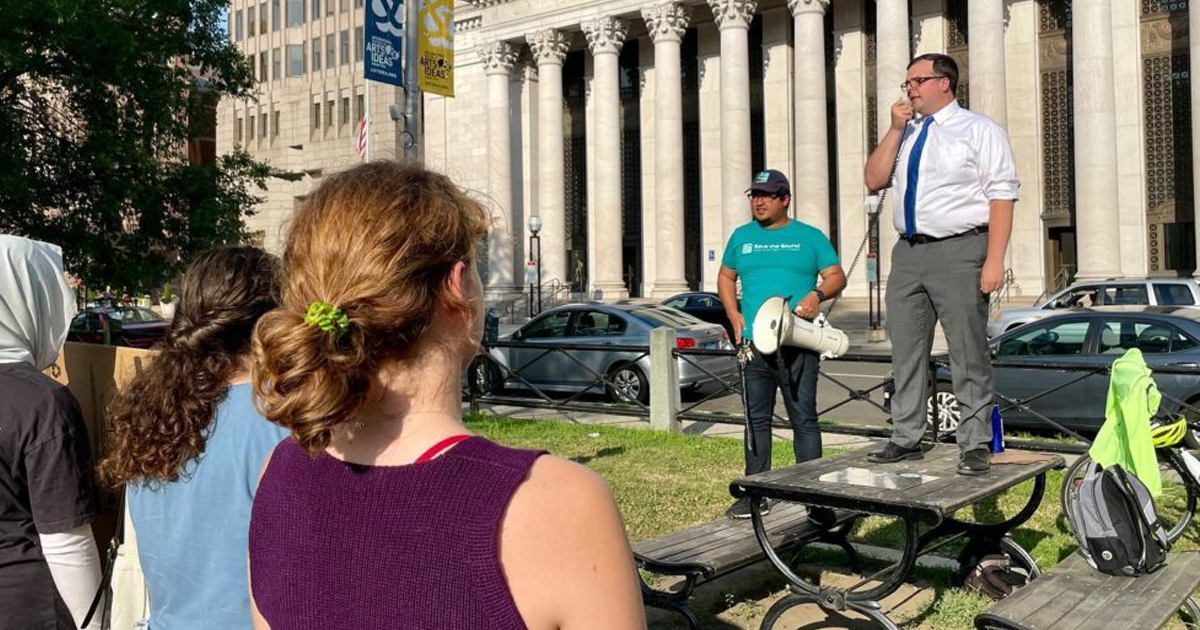 Late last month, the U.S. Supreme Court handed down a ruling in West Virginia v. EPA, a case challenging Obama-era guidelines for states to follow on limiting carbon dioxide emissions from existing power plants. In a 6-3 vote, the U.S. Supreme Court ruled that the EPA went beyond the scope of its power in mandating utilities to make system-wide changes from coal power generation toward wind and solar energy.

“The Supreme Court’s ruling is contrary to science, public health, and justice,” Chris Kelly, a legal fellow at Save the Sound said in a press release. “EPA still has authority under the Clean Air Act to regulate pollutants from power plants and should issue the strictest regulations possible. Likewise, cities and states can do their part to decarbonize and protect their communities by investing in clean, electrified transportation solutions and by strengthening the Global Warming Solutions Act to hold Connecticut accountable for its emissions goals.”

With Congressional debate to address greenhouse gas emissions at a stalemate, any new actions taken by the EPA will have to rely on statutes drafted before climate change became a national debate. The Court’s decision will limit the EPA’s ability to reduce emissions from one of the nation’s heaviest polluting sectors. According to data from the EPA, electricity production accounted for 25 percent of greenhouse gas emissions in 2020, the second-largest source, only behind transportation.

“The Court appoints itself—instead of Congress or the expert agency—the decision-maker on climate policy.” Sharon Lewis, executive director of the Connecticut Coalition for Economic & Environmental Justice, said. “This ruling clearly undermines the broad powers of the EPA to regulate pollution, which is needed to address the deepening climate crisis.”

Following the Supreme Court’s decision, Gov. Ned Lamont released a statement to Connecticut residents stating that climate action will remain a priority for his administration and calling for action from Congress.

“This is another example of the Supreme Court advancing an ideological agenda that serves special interests, but not the national interest,” Gov. Lamont said. “I’ll continue to do everything I can to ensure Connecticut continues to lead the way, and I’ll keep working collaboratively with governors across the nation to ensure we’re doing everything we can as states to reduce carbon pollution. The climate crisis requires a national strategy and federal inaction is unacceptable.”

Earlier this year, Gov. Ned Lamont signed a bill into law requiring the state to eliminate greenhouse gas emissions from electricity by January 1, 2040. Currently, Connecticut’s electric supply is 65 percent carbon-free, and with the offshore wind projects scheduled to be completed in 2026, the state’s power supply is expected to be 91 percent carbon-free when the wind projects come online, according to the governor’s statement.

A national, award-winning journalist from Bristol, Tom has a passion for writing. Prior to joining CII, he worked in print, television, and as a freelance journalist. He has taken deep dives into sexual assault allegations by Connecticut professors, uncovered issues at state-run prisons, and covered evictions in the New Britain Herald. He chose to focus on issues based in Connecticut because this is his home, and this is where he wants his work to make the greatest impact.
Email Author
More by Author
Twitter
ProtonMail
«Previous Post
Post-pandemic housing permits show decline in multifamily construction»Next Post
Gov. Lamont announces new Metro-North express lines