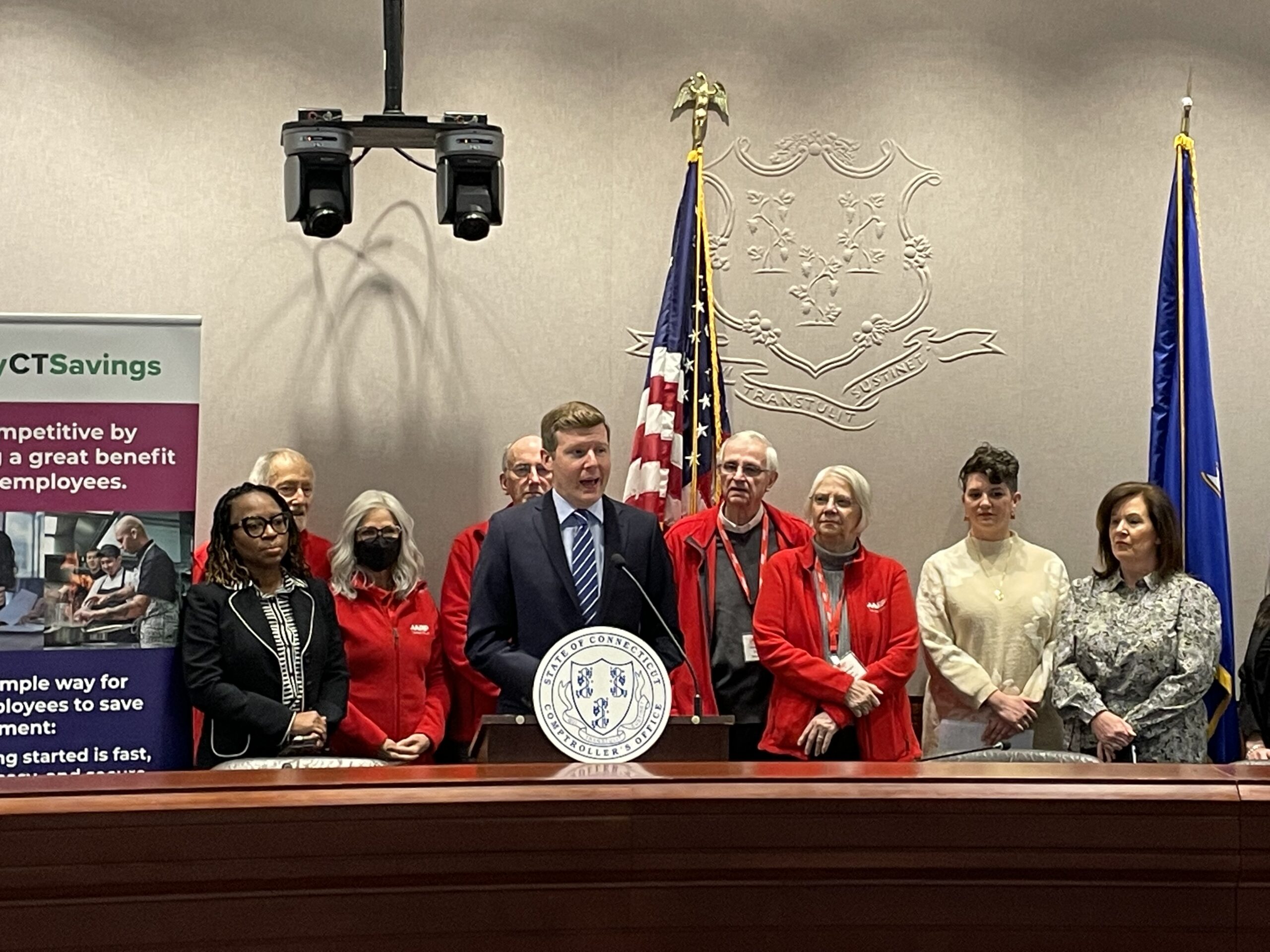 During a press conference announcing his office’s outreach efforts to small Connecticut employers regarding the state’s new retirement savings program, Comptroller Sean Scanlon said there was no “stick” to penalize employers for failing to register for the program, but said he was working legislatively to address that loophole ahead of a March 30 deadline.

“At the end of the day, we don’t want to get to that point,” Scanlon said. “We want to work proactively with these businesses.”

The regulatory change proposed by the Comptroller’s Office would amend regulations that pertained to the Connecticut Retirement Security Program, allowing for the Comptroller to set deadlines for employer enrollment “not later than sixty days after issuance of informational material” or “such other time period as prescribed by the Comptroller,” according to the regulation proposal.

The Comptroller’s Office has been sending out informational material in waves based on the size of the business. Employers who already provide a qualifying retirement plan to their employees are exempt but must certify with the program administrator.

Qualifying businesses that fail to register could leave themselves subject to a civil action by either an employee or the labor commissioner under existing state statute for the Connecticut Retirement Security Authority, the now-defunct quasi-public agency originally tasked with administering the program.

The regulatory change would not require passage by the full General Assembly but would require approval by the joint bipartisan Regulation Review Committee.

The Comptroller’s Office, however, says their main focus remains on outreach to Connecticut businesses.

“Connecticut businesses have been enthusiastic about joining MyCTSavings and partnering to help close Connecticut’s retirement security gap for hundreds of thousands of workers across our state,” said Madi Csejka, press secretary of the Office of the Comptroller. “Our focus is on outreach and education about benefits of the program, which will always come before enforcement tools.”

A second regulatory change submitted the same day by the Comptroller’s Office, participants’ contributions toward MyCTSavings will be held in a “capital preservation fund” for sixty days in case the employee changes their mind “to avoid the possibility of investment losses to the individual’s contributions in the interim.”

During the MyCTSavings press conference on January 11, Scanlon said that 900 businesses and amassed $1.7 million in assets thus far. The Comptroller’s Office said it had mailed letters to 22,000 businesses as part of its third wave of outreach, encouraging employers to enroll in the program.

Employers do not contribute to the savings program; however, employees can deduct a minimum of 3 percent of their pay and choose which plan to invest their savings. The program is meant to fill a gap in retirement savings for those working for small businesses or in lower-income jobs.

The proposed regulatory changes are open to comment until February 17, 2023.

Marc worked as an investigative reporter for Yankee Institute and was a 2014 Robert Novak Journalism Fellow. He previously worked in the field of mental health is the author of several books and novels, along with numerous freelance reporting jobs and publications. Marc has a Master of Fine Arts degree from Western Connecticut State University.
Email Author
More by Author
Twitter
ProtonMail
«Previous Post
Zoning In: When Affordable Housing Came to Brookfield»Next Post
Gov. Lamont outlines anti-gun violence proposals