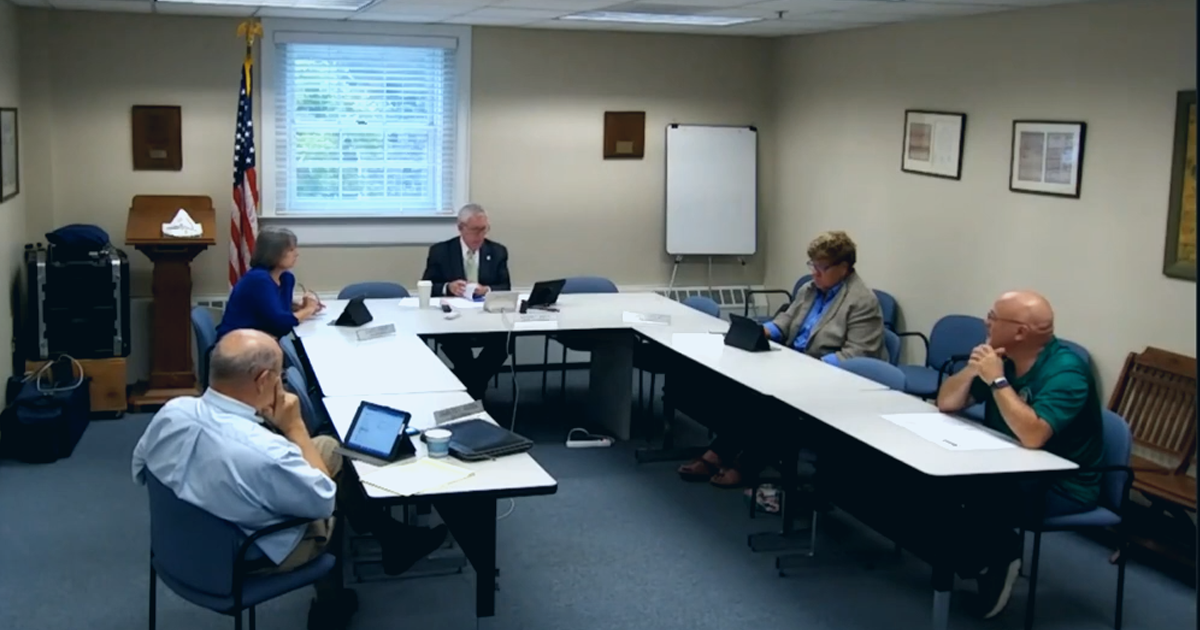 The Guilford Board of Selectmen agreed that they would fully support the town’s Board of Education in defending itself against a federal lawsuit initiated by Guilford parents who say their children are being bullied by school staff and students because of their parents’ political beliefs.

Citing a news article that listed the organization, We the Patriots USA, Inc. which is registered in Idaho, as funding the lawsuit, selectman Charles Havrda said toward the conclusion of a September 19 meeting, “I would like to express my concern that, especially, an outside organization wants to use Guilford to make some political point and I assume that Board of Ed is going to vigorously defend against this situation.”

“It’s a PR campaign in my perspective and I don’t like it,” Havrda continued, saying he hoped the Board of Selectmen could signal that they intend to vigorously defend it.

First Selectman Matthew Hoey said Havrda’s sentiments were shared around the table and that the Board of Education will be defended by the town’s insurer, but that the town could also appoint second counsel.

“I’ve had some discussions with some attorneys who you would probably recognize who, at least one indicated, would take the case on pro bono but clearly there may be other costs related to it that I think we should be, as a town and a board, prepared to fund adequately so we can present the best defense as possible,” Hoey said, adding it may include funds for “outside investigatory work.”

Although We the Patriots USA, Inc is listed as an Idaho-based nonprofit organization, the group was founded and is run by two Connecticut residents – Attorney Brian Festa who is vice-president of We the Patriots, and Dawn Jolly who is listed as president – and was originally registered in Bristol, Connecticut, according to the Internal Revenue Service.

Festa and Jolly also co-founded the Connecticut Freedom Alliance, an organization that challenged Connecticut’s mask mandate in court. We the Patriots is funded by donors and the organization’s press release indicates that they are still raising money for the lawsuit against the Guilford Board of Education.

The lawsuit was filed by William Maisano, Danielle Scarpellino and Tim Chamberlain, three residents who unsuccessfully ran for election to the Guilford Board of Education in 2021, on the platform of taking “critical race theory” teachings out of the school system. They are being represented by attorneys Norman A. Pattis and Kevin M. Smith.

Scarpellino says the idea that her advocacy and this lawsuit is part of some larger, nationally driven campaign by outside interests is “flattering to some degree, but it’s absolutely false on every level,” and that the lawsuit is solely the result of her interactions with the Board of Education and the retaliation she and her children have faced.

Maisano, Scarpellino and Chambelain claim their children – also listed as plaintiffs in the lawsuit – have been subjected to bullying and harassment by both staff and students, including allegations of physical and sexual assault and being singled out by teachers for derision in the classroom for their beliefs.

Reached for comment, Maisano pointed to social media campaigns and comments against himself and the other plaintiffs, saying he and fellow plaintiffs are being “painted as subhuman,” in what has become a politically and culturally charged town issue.

“They will do everything to erase you,” Maisano wrote in a message. “They will gossip and lie. Paint you as subhuman, and that will justify destroying you. All this as they display a ‘Hate has no Home Here’ lawn sign.”

The lawsuit alleges the plaintiffs, and their children, are being retaliated against for activities protected under the First Amendment and that the defendants, including some individually named teachers and administrators, have sought to compel speech in violation of the First Amendment. The lawsuit also alleges religious discrimination and violation of the equal protections clause.

Selectman Louis Federici said that if it is determined the lawsuit was brought for some ulterior motive other than the reasons listed in the court complaint, there could be grounds to recover costs if the claim was a nuisance suit.

“You got to win the case and then prove there was no probable cause for them to bring that claim and that it was brought with malice,” Federici said, adding that he has not reviewed the pleadings at that time. “But at the end of the day, that’s a possibility and everyone should proceed cautiously, meaning the plaintiffs.”

“I have not seen anything to suggest that what has been accused here is anything that could even remotely be likely by the administration, the school board or the teachers and certainly [superintendent] Dr. Freeman,” Federici said.

Marc worked as an investigative reporter for Yankee Institute and was a 2014 Robert Novak Journalism Fellow. He previously worked in the field of mental health is the author of several books and novels, along with numerous freelance reporting jobs and publications. Marc has a Master of Fine Arts degree from Western Connecticut State University.
Email Author
More by Author
Twitter
ProtonMail
«Previous Post
Crime is down in CT but so are clearance rates»Next Post
The energy crisis out west should be a wake-up call for CT