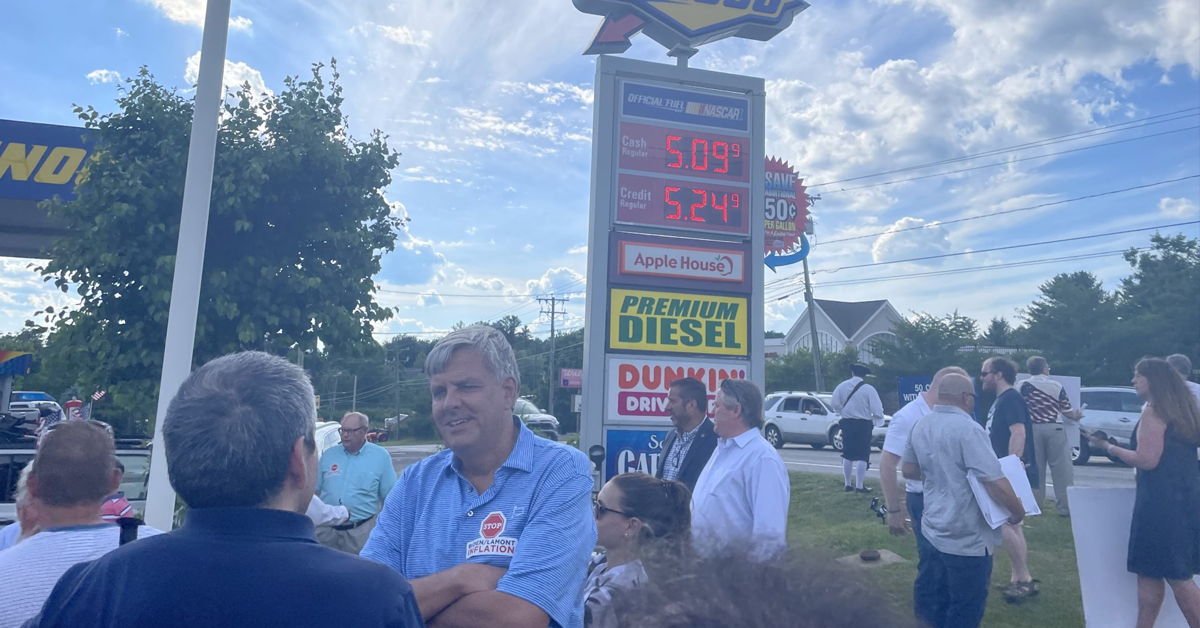 Standing at a Torrington gas station advertising gasoline for $5.09 per gallon, Torrington resident and mother of five Nicole Milo says price increases in Connecticut and across the country “feels like another lockdown, in a different way.”

“I feel like [her children] have been so traumatized by the pandemic and all those things and now, just the stress financially that we’re encountering at the grocery store, at the pumps, it’s crippling us,” Milo said.

She was part of a rally held by Republicans, including Republican gubernatorial candidate Bob Stefanowski, pushing for the General Assembly to hold a special session to return more tax dollars to Connecticut residents as inflation tops 8.6 percent and both the economy and Wall Street are showing signs of trouble.

This was the first of eight rallies planned for June as Republicans gear up for a campaign season during a time of economic hardship that Republicans hope will translate to wins at the polls for GOP candidates.

“Out of control gas prices,” Stefanowski said. “The governor says he can’t do anything about it, but of course he can, he can get rid of the gross receipts tax on regular gas, he can suspend this diesel tax everyone is struggling with, instead he’s going to increase it.”

“I’m out here to support the people,” Stefanowski continued. “We’re pleading with the governor to call a special session to do something about the out of control prices. He certainly has the money to do it. He’s sitting up there with three billion dollars of our money, give some of it back, now’s the time to do it.”

The rally – reminiscent of the successful No Tolls rallies held during the first two years of Gov. Ned Lamont’s administration – focused on where people are seeing and feeling the pain of increasing prices, namely, gas stations.

But across nearly all sectors, prices are rising adding to the cost of living in a state that already has a high cost to begin with. Rent, groceries, energy – the basic necessities of life – have all been rising in the aftermath of the pandemic.

John Morris, a long-time GOP State Central Committee leader for the 30th district, says the entire Northwest corner says he believes the cost of living issue only going to get worse, something that translates well for his candidates.

“With the prices continually going up and people being pressed the way they’re going to – it’s only going to get worse, unfortunately – it’s going to be looking very good for us,” Morris said. “It’s the Republican Party who is proposing to help every taxpayer. There’s a big difference between what’s being proposed by Republicans in the House and Senate and what actually passed.”

Gov. Lamont and the Democrat-led General Assembly assembled a package of tax cuts including suspension of the state’s 25 cent gasoline tax, a child tax rebate, increased property tax credits and a cap on the motor vehicle property tax, amounting to roughly $660 million. Lamont has touted the tax cuts as the largest in state history.

Morris, however, says those tax cuts are limited to particular groups, saying that single people without children will not benefit from child tax rebates and income thresholds limit property tax relief while the motor vehicle property tax cap only affects certainly municipalities with higher mill rates.

“There’s no relief on the sales tax,” Morris said. “The reason the money is running into the state the way it is, is because the price of everything is going up and therefore, if you pay the same sales tax, the revenue automatically goes up, not because the economy is growing, not because people are doing better but simply because of this awful inflation that’s going on by Joe Biden and the Democrats.”

The Republican proposal called An Affordable Connecticut, would amount to roughly $1.2 billion in tax relief and includes cuts to the income tax for middle and working class families, expansion of the gas tax holiday to include diesel fuel, eliminating the highway use tax on trucks, reducing the sales and restaurant tax and increasing assistance to families to help pay for energy costs.

And they’ve started a website called Affordable Connecticut outlining their plan and encourage people to send a message to the General Assembly calling for a special session to provide further tax relief.

Contrary to expectations at the outset of the pandemic, the State of Connecticut saw revenue increases, particularly for taxes related to Wall Street earnings and the sales tax, resulting in revenue surpluses. Combined with federal COVID-relief funds, the state now found itself with a full Rainy Day Fund, paying down pension debt and a surplus bolstered by federal dollars.

And while some of that surplus revenue is being returned in the form of tax relief under the latest budget agreement, the budget also increased appropriations by $574 million over the original 2023 budget and $1.4 billion over 2022, according to the Office of Fiscal Analysis.

However, the prospect of Lamont and Democrat leaders holding a special session to run a Republican tax relief plan is unlikely, as Democrats campaign on the tax relief already provided in the 2023 budget.

Marc worked as an investigative reporter for Yankee Institute and was a 2014 Robert Novak Journalism Fellow. He previously worked in the field of mental health is the author of several books and novels, along with numerous freelance reporting jobs and publications. Marc has a Master of Fine Arts degree from Western Connecticut State University.
Email Author
More by Author
Twitter
ProtonMail
«Previous Post
Community Garden Grant Program opens applications for municipalities»Next Post
CT auditor named president of national organization