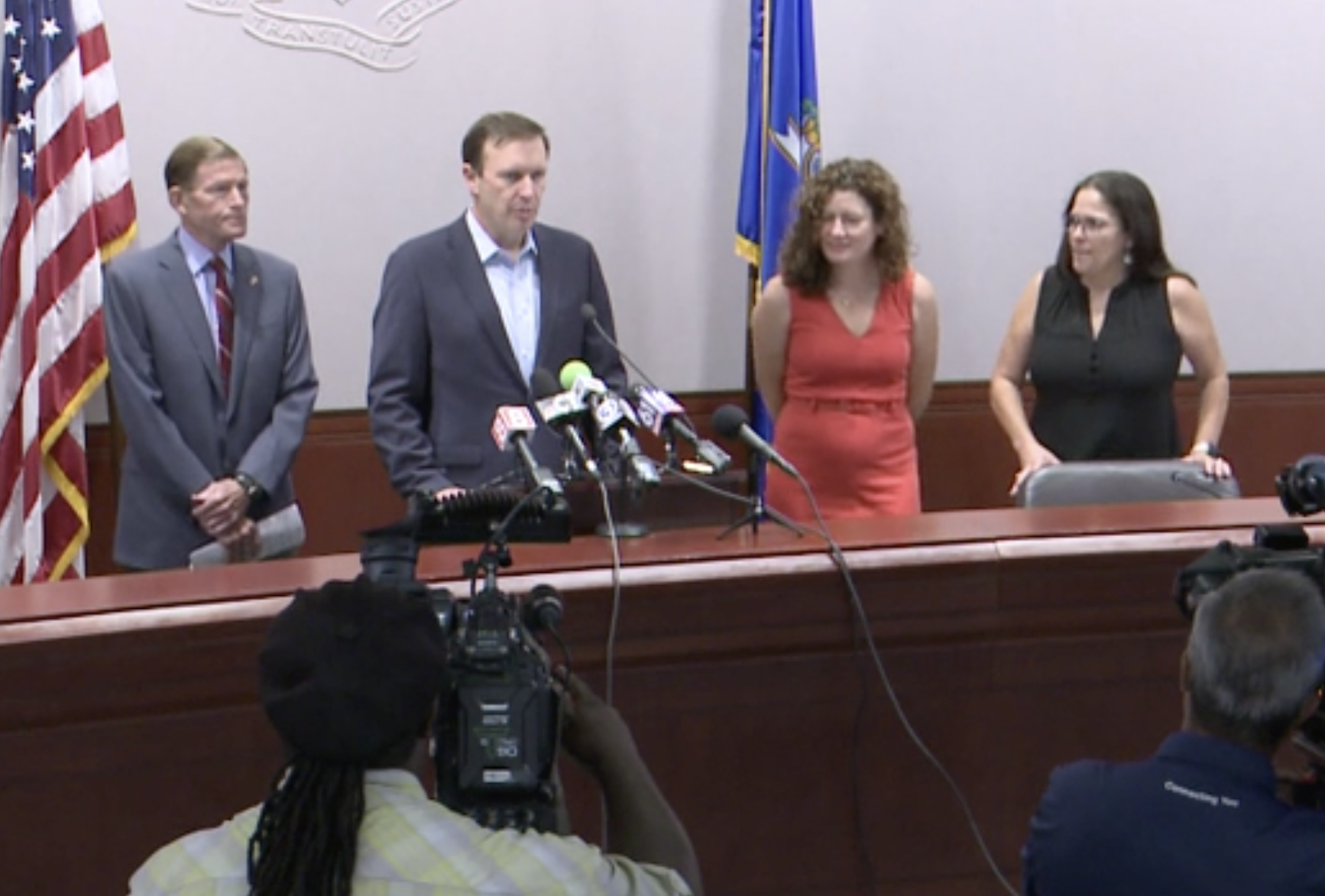 Connecticut lawmakers and leaders came together on Monday morning to praise the U.S. Senate’s passage of the Inflation Reduction Act (IRA) this past weekend, a sweeping $750 billion piece of legislation that aims to tackle climate change and healthcare costs.

Senator Chris Murphy called the last few months “the most productive summer in the United States Congress in generations,” citing the passage of this bill as well as the recent bipartisan bills on gun control, veteran support, and domestic microchip production.

“What we saw this summer was a pretty fundamental shift in who has power in Washington,” said Murphy to open Monday’s press conference. “All of a sudden the gun industry, the drug industry, the oil industry don’t have as much power as they used to…”

The bill allows the federal government to negotiate costs for some prescriptions through Medicare with the hope that this would drive down federal spending as well as individual out-of-pocket expenses.

“For 20 years it has been illegal for Medicare to negotiate the cost of prescription drugs and that is finally over,” lauded Connecticut AARP Director Nora Duncan, though it should be noted that the bill has not yet passed into law.

That provision comes in addition to a $2,000 per year cap on out-of-pocket expenses for Medicare recipients as well as an extension of insurance premium assistance under the Affordable Care Act and an end to cost sharing for recommended vaccines. Duncan said that some seniors choose not to get the Shingles vaccine due to the cost.

Relief for healthcare costs did not extend past those on federal assistance, however. An amendment that would have added a $35 per month cap to insulin prices for Americans on private health insurance failed when it only received the support of three Republican senators (the measure required 10 to pass). A similar cap for Medicare recipients passed the House earlier this year.

A recent Yale study noted that of the 14% of insulin users who face catastrophic spending, Medicare recipients make up 2/3 of those patients, while those on private insurance pay the highest amount overall.

Bringing down costs was also a factor in the bill’s climate measures, though those changes were targeted at businesses rather than individual consumers. CT Department of Energy and Environmental Protection Commissioner Katie Dykes noted that that state has already been positioned to take advantage of many of the funding measures that would be created under the bill. These include the Department of Affordable Housing Retrofits. Part of the IRA would make $60 billion in grants available to install clean energy solutions in affordable housing, part of an effort to target clean energy efforts at low-income communities which often suffer greater impacts from climate change.

“This bill also reflects something we’ve known for a long time here in Connecticut, which is that by investing in clean energy and energy efficiency and a clean energy economy, we grow jobs and we save consumers money,” said Dykes, referencing a study out of UMass Amherst which claims the bill will create 9 million jobs.

Dykes also cited the state’s previous investment in clean energy, including the State Pier project in New London, which will create a staging area for an offshore wind project when it is completed next year. The project has been the subject of continued debate, at once bringing in new funding for the city while local workers, like the longshoremen’s union, remain concerned over their role in the completed project.

Ultimately, the climate portion of the IRA has set a goal of a 40% reduction in greenhouse gas emissions by 2030 through over 100 different programs, some of which Connecticut will be well positioned to take advantage of. Commissioner Dykes and CT DEEP called out several of these programs on Twitter following the press conference, including urban forestry, additional tax credits for the purchase of new and used electric vehicles and nature-based infrastructure.

The bill itself is projected to cost $450 billion to implement but calls for the raising of $750 billion in tax revenue. The additional $300 billion has been earmarked for deficit reduction. That money would be raised by implementing a 15% tax on corporations making more than $1 billion in revenue, as well as a 1% tax on stock buybacks.

A measure that has caused some increased scrutiny, however, is one that provides nearly $80 Billion in additional funding to the IRS to strengthen the department’s ability to collect those taxes. When asked about it, Sen. Murphy dismissed concerns that it would negatively impact middle-class taxpayers he says have been invented by his Republican colleagues.

“The entire investment is about going after the billions of dollars that are lost to all of us because the richest taxpayers often get around paying taxes,” said the Senator.

Murphy also noted that, while the bill is called the Inflation Reduction Act, the inflation combating measures of the bill rest largely on the fact that it is designed to take in more than it spends, thus reducing the amount of money the federal government is pumping into the economy.

“There are some economists that say ‘well, in the short run, it’s not clear that this will have a huge impact on inflation.’ But it will have an impact on the costs people pay,” argued Murphy. “When it comes down to it, at the end of the day, people care about how much they’re paying. And in this bill, there are huge savings for drug prices, huge savings for insurance premiums, and big savings on electricity costs.”

Despite its name, the bill is not designed to affect inflation in the short term but rather affect it on a long-term “macro” scale. Speaking to Vox, Marc Goldwein, the senior policy director at the Committee for a Responsible Federal Budget, said that “this isn’t a bill about 2022.”

The IRA passed on a strict party-line vote by the Senate on Sunday afternoon, following an overnight debate. Vice President Kamala Harris served as a tie-breaker for the 50-50 split. It could be taken up by the House as early as Friday when they reconvene, but a specific date has not been set.

An Emmy and AP award-winning journalist, Tricia has spent more than a decade working in digital and broadcast media. She has covered everything from government corruption to science and space to entertainment and is always looking for new and interesting stories to tell. She believes in the power of journalism to affect change and to change minds and wants to hear from you about the stories you think about being overlooked.
Email Author
More by Author
Twitter
ProtonMail
«Previous Post
Connecticut pension funds take a hit in first half of the year»Next Post
Connecticut has some of the highest credit card debt as interest rates rise