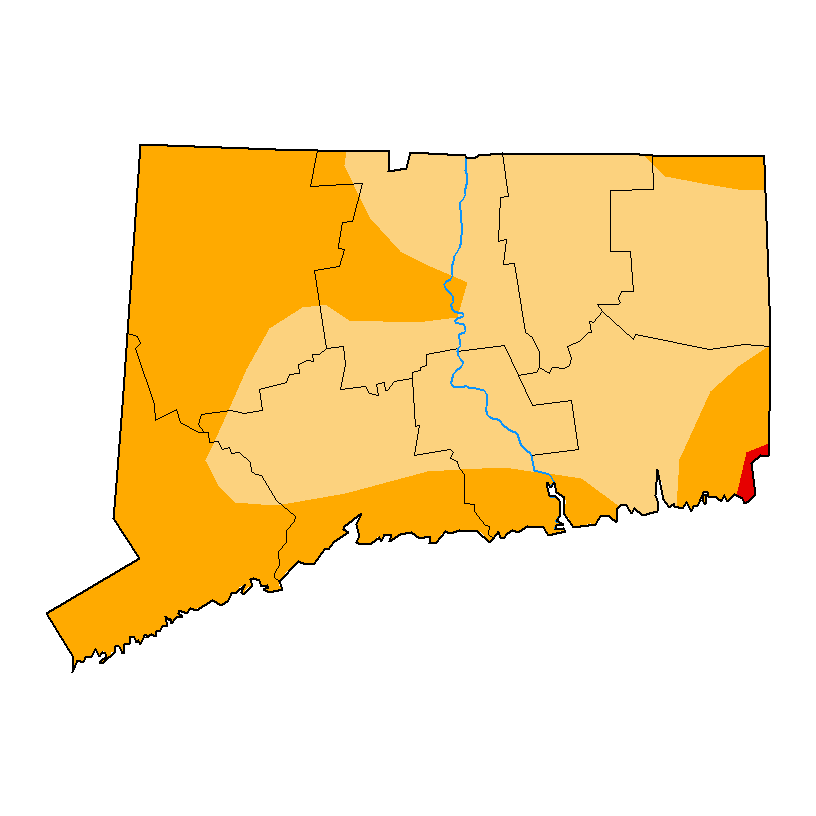 It might be hard to believe after the rainfall we received last week but the state of Connecticut is still very much in a drought.

According to the U.S. Drought Monitor Map from the University of Nebraska-Lincoln, every one of the state’s eight counties is experiencing at least Moderate Drought. Fairfield and Litchfield counties have been largely designated areas of Severe Drought. Meanwhile, a small portion of New London County is marked at Extreme.

This is a slight improvement over conditions just a few weeks ago, when nearly every county in the state was under Severe Drought conditions, but it is far from problem solved.

So why haven’t the recent rains fixed everything? According to the U.S. Geological Survey, it takes prolonged soaking rainfall to alleviate drought. In short showers and even thunderstorms, rainfall is too brief to properly penetrate deep into the ground and much of it runs off into sewers and storm drains. Soaking rains are different, lasting long enough to seep into groundwater and sustain vegetation.

But, warns the USGS, “multiple such rains over several months might be required to break a drought and return conditions to within the normal range.”

The primary threat from a drought is one to agriculture. Impacts of extreme drought include widespread crop loss, financial losses for dairy farmers, and wildlife disease.

As a result of the drought conditions last month, the U.S. Department of Agriculture approved a primary natural disaster designation for New London and Windham Counties. That declaration allows farmers to apply for assistance from the Farm Service Agency.

The declaration also extended assistance to Hartford, Tolland, and Middlesex Counties as “contiguous counties.” It did not extend relief to farmers in Litchfield, New Haven, or Fairfield counties.

For that reason, Governor Lamont has now sent a request for primary disaster declarations for both Litchfield and New Haven counties. In his letter, the governor stated that those counties “have experienced the same drought with resulting qualifying losses of at least thirty percent (30%) in at least one crop in the county.”

If the disaster declaration is approved, assistance will also be available to Fairfield County due to its position between Litchfield and New Haven counties.

An Emmy and AP award-winning journalist, Tricia has spent more than a decade working in digital and broadcast media. She has covered everything from government corruption to science and space to entertainment and is always looking for new and interesting stories to tell. She believes in the power of journalism to affect change and to change minds and wants to hear from you about the stories you think about being overlooked.
Email Author
More by Author
Twitter
ProtonMail
«Previous Post
Connecticut top five in processing Medicaid applications»Next Post
Ridgefield man found guilty for role in January 6 riots