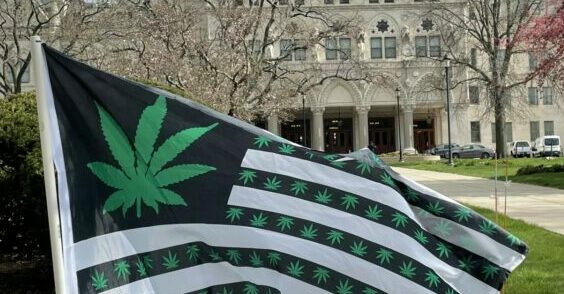 Upwards of 44,000 marijuana related convictions in Connecticut will be either fully or partially cleared in January as part of the state’s legalized cannabis law passed in 2021.

A conviction for possession of under four ounces of a “non-narcotic, non-hallucinogenic” substance between January 1, 2000, and September 30, 2015, will be automatically erased and individuals who were convicted on those grounds are not required to do anything.

For those convicted of possessing up to four ounces of a “cannabis-type substance” imposed before January 1, 2000, and after October 1, 2015, can have their convictions erased by filing a petition in Superior Court, as can those who were convicted of manufacturing, selling or possession with intent to sell when the amount was under four ounces, or six plants grown in a home for personal use.

Individuals who were convicted on charges falling under these categories will then be able to “tell landlords, employers and schools that the conviction never occurred,” according to a press release from Gov. Ned Lamont.

“Especially as Connecticut employers seek to fill hundreds of thousands of job openings, an old conviction for low-level cannabis possession should not hold someone back from pursuing their career, housing, professional, and educational aspirations,” Lamont said.

The erasure of previous convictions for possessing less than four ounces of cannabis was not the only reform to Connecticut’s laws to come out of the 2021 bill legalizing adult-use marijuana. The legislation also lowered penalties for illegally selling cannabis from fines upwards of $25,000 and seven years in prison for a first offense, down to $500 and a potential three-month prison sentence for a subsequent offense.

The law also prohibits minors under the age of 17 from being “adjudicated delinquent” for possession of five ounces or less of cannabis; limits when cannabis can be cited or used as the basis for a parole or probation violation and doesn’t allow bail commissioners to restrict the use of cannabis as a condition of bail except in certain circumstances.

The legalized cannabis law also no longer allows police searches of vehicles for possession of up to five ounces of cannabis, up to $500 in cash in the presence of cannabis or the smell of cannabis.

The January erasure of cannabis convictions comes ahead of another initiative aimed at erasing past convictions set to be implemented in the latter half of 2023. Connecticut’s Clean Slate law will allow for the automatic erasure of certain criminal convictions provided the individual has stayed out of trouble for seven to ten years.

The Clean Slate law will apply to “most misdemeanors, most Class D and Class E felonies, and most unclassified felonies with a possible prison sentence of five years or less.”

However, according to the press release, implementation of the Clean Slate law “involves significant information technology upgrades to allow criminal justice agencies to send and receive data to determine who can have their offenses erased and to update record systems.”

The State of Connecticut has spent $5 million thus far to upgrade the technology required to implement the Clean Slate law, and there are remaining questions as to certain felonies that require sex offender registration or deadly weapon offender registration, which would nevertheless be included in the Clean Slate law, according to a letter from the Criminal Justice Information System Governing Board.

Marc worked as an investigative reporter for Yankee Institute and was a 2014 Robert Novak Journalism Fellow. He previously worked in the field of mental health is the author of several books and novels, along with numerous freelance reporting jobs and publications. Marc has a Master of Fine Arts degree from Western Connecticut State University.
Email Author
More by Author
Twitter
ProtonMail
«Previous Post
State of CT to pay $72k in union dispute with DOC employees»Next Post
A look ahead to 2023