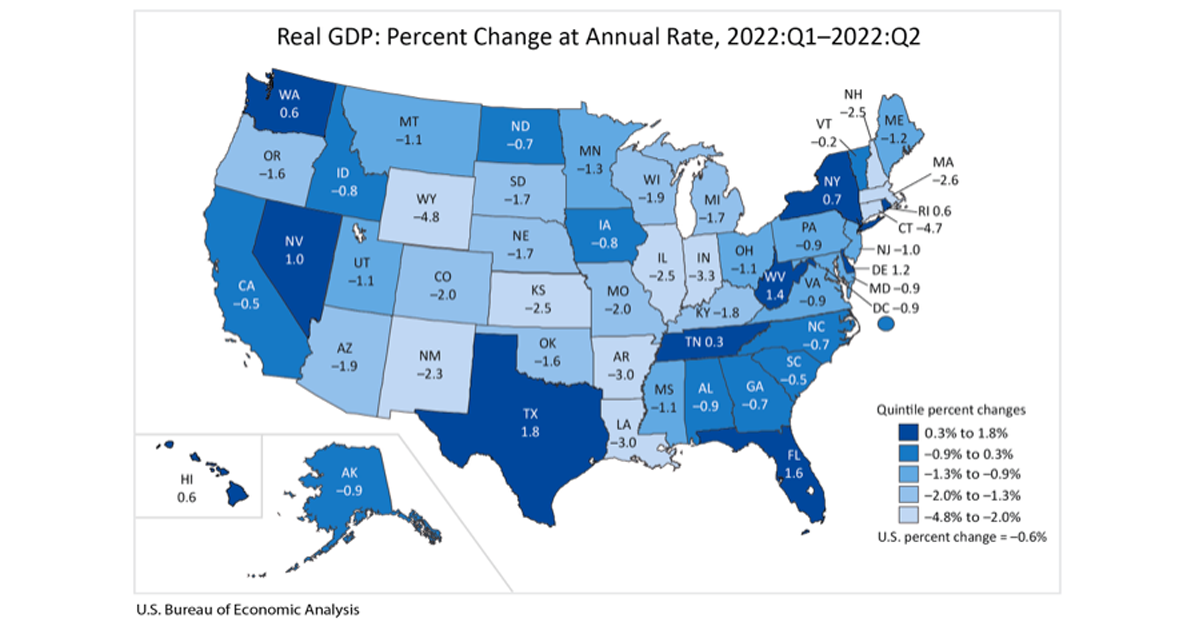 Connecticut’s gross domestic product (GDP) saw the second-largest decrease in the country in the second quarter, part of an overall shrinkage in GDP across 40 states, according to new numbers from the U.S. Bureau of Economic Analysis (BEA).

The decrease in gross economic output in Connecticut was largely due to decreases in the finance and insurance industry, which the BEA noted was the “largest contributor” to the decline in Connecticut’s GDP. Only Wyoming experienced a bigger decrease at 4.8 percent.

“The finance and insurance industry was the leading contributor to the decrease in Connecticut, the state with the second-largest decrease at 4.7 percent,” the BEA analysis said.

According to data supplied by BEA, Connecticut’s insurance and finance sector saw the largest decrease in output of negative 1.77 percent, followed closely by durable goods – part of the manufacturing sector — at negative 1.66 percent.

There were small increases in the utilities, transportation, retail, and information sectors, but not enough to overcome the larger losses.

Chris DiPentima, president and CEO of the Connecticut Business and Industry Association (CBIA) says the number “highlights the impact the state’s labor shortage crisis — along with inflation and bottlenecks — is having on our economy.”

“The finance and insurance and manufacturing sectors, two critical components of our economy, saw some of the biggest declines in the first quarter,” DiPentima said. “The performance of those sectors, along with contraction in the construction and real estate sectors — which typically act as early warning signs — is very troubling.”

The negative GDP numbers among states come as recession fears continue in an economy that is anything but predictable along traditional economic lines. Economic output has decreased, inflation has hit 40-year highs, interest rates have increased, and the stock market has seen some serious slides, but employment has thus far remained strong.

Connecticut’s unemployment rate remains low and jobs numbers have been increasing, although the state continues to recover from the economic effects of the COVID-19 pandemic at a slower rate than the rest of the country.

“These numbers should sound alarm bells for the state’s policymakers and those running for elected office this fall,” DiPentima said.

**This article was updated with comments from Christ DiPentima of CBIA**

Marc worked as an investigative reporter for Yankee Institute and was a 2014 Robert Novak Journalism Fellow. He previously worked in the field of mental health is the author of several books and novels, along with numerous freelance reporting jobs and publications. Marc has a Master of Fine Arts degree from Western Connecticut State University.
Email Author
More by Author
Twitter
ProtonMail
«Previous Post
Fifth grader makes and sells hundreds of cards to support police scholarship»Next Post
Clean slate: Connecticut’s new path to automatic pardons