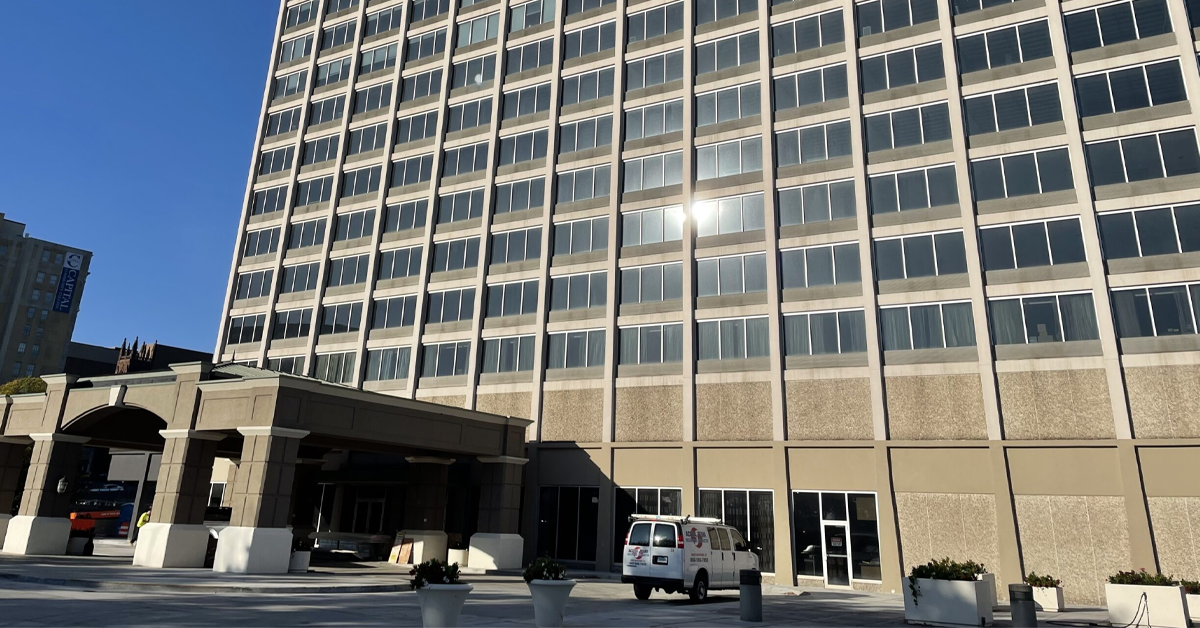 Residents of The Millennium in Hartford say a formerly evicted tenant who repeatedly exposed himself to people on the property is continuing to make his way into the apartment building and films himself in the nude, purportedly for his OnlyFans page.

“On Sunday, one of the building residents witnessed Kyronne Williams nude and pleasuring himself in our gym,” the Millennium Tenants Union wrote in an October 11 Facebook post. “Residents phoned police and returned to the gym to document the incident. They witnessed a mostly nude male, with coconut oil, trying to put his clothes back on. This man pushed another resident to the ground twice, in his hurry to leave the scene of the crime before the police arrived.”

The tenants who confronted Williams took pictures of a mostly nude male attempting to gather his things in the gym and posted the picture to their Facebook Page.

This is not the first time Williams has allegedly exposed himself. The tenant union said that there have been five times Williams exposed himself residents of The Millennium and they allege he is filming himself performing lewd acts in public places for his OnlyFans page.

Emails between a Millennium resident and property manager Andrew Chapman shared with CT Inside Investigator indicate Williams was previously evicted from the property under a pseudonym, but Williams has gained access to the building anyway.

Chapman said in the October 9 email that, “I will be working with Community Service Officer Demaine (Downtown Hartford’s CSO) on filing a trespassing report as well as securing a no trespassing order against him from our own attorneys once his identity is confirmed.”

Text messages between another Millennium resident and the management company from July and August of this year show Williams had been exposing himself to women while making his videos.

According to an August 2 text message, the tenant wrote, “I have come to learn that other women have reported this person within this past week and it seems his behavior is escalating. He is making me and other residents uncomfortable and I would hate for someone to be harmed because of the company’s failure to remove this person from the premises, especially given that you guys now have notice of his sexual harassing behaviors.” Millennium Luxury Living responded that they were temporarily closing the gym until “until this person can be removed,” and that they were “actively working on removing them.”

Millennium resident and member of the tenant union Maureen Leahy says that security at the apartment complex has been lacking and there hasn’t been enough action by the property management company.

“He supposedly leased an apartment in this building under a pseudonym which means they’re not doing background checks,” Leahy said in an interview. “This is all happening because we’re like the only residential building downtown that doesn’t have security and we don’t have security because they fired them last June. So, when I moved in, we had security and then they got rid of them, and all these problems started happening.”

Leahy says there are security measures to gain access to the building, but often residents will prop open the doors, meaning anyone can gain access. According to the emails, access to both the elevators and the gym previously required a fob, but Chapman wrote that, “the old fob systems within the building became redundant once we secured the exterior doors to the building with the new system,” and added that the new gym has security cameras.

Court records show that a Kyronne Williams has been convicted twice in Connecticut on public indecency charges in 2019, and for felony forgery and misdemeanor disorderly conduct and 6th degree larceny in 2019, but, at this point, it is not verified whether this is the same individual.

Yitz Rabinowitz, CEO of the Axela Group, which co-owns the property under a joint venture with Shelbourne Global Solutions, LLC, says Williams was already living in the building when they took over, but he was never on the lease and was evicted.

“It appears that when he came in, he was never authorized to be in the building at all, he was never on any lease,” Rabinowitz said. “This is the first time that we’re aware he entered the building illegally and the police are out looking for him.”

But Rabinowitz believes the tenants’ union itself is behind some of these incidents because the people leading the union are facing eviction, including Leahy. He cites several incidents of vandalism and destruction of property within the apartment complex and says the tenants then go to the media to make the owners and property manager look bad.

“Because they’re undergoing eviction of their own, they’ve been sabotaging the property, there’s a lot of things going on at the property from stealing the camera system, cutting the fire alarm,” Rabinowitz said. “These are real problem tenants and it’s hard to know how they gain entry but they’re looking to sabotage the property and, again, it’s a possibility – there’s no way to know for sure – that this was one of their acts, letting this guy in the building.”

“It’s just a few tenants undergoing eviction who are causing mayhem in the building,” Rabinowitz said. “They do this at other properties, so they’re repeat tenant problems.”

The building was acquired by the joint venture when the former owner, Inner Circle, was foreclosed upon as they tried to convert the hotel into apartments. Shelbourne and Axela plan to create 260 apartments but the renovations and purported problems at the complex led tenants to form a union earlier this year.

Rabinowitz says they have installed security cameras, an app-based security entrance and are building a new parking garage that was previously condemned by the city, but the tenants’ union has continually sought to complicate the rehabilitation process.

Aside from the complaints about conditions in the apartment complex, which is still undergoing renovations, Leahy says the incidents with Williams exposing himself and gaining access to the building has left her and others shaken.

“I’m afraid to leave my apartment by myself now for a couple months,” Leahy said. “I don’t go out alone.” The tenants have filed a police report on the incident.

“We’re doing everything possible to keep the property secure and safe, we put in millions of dollars into this property,” Rabinowitz said, adding that he had personally spoken with police earlier in the morning. “We really took a distressed property, that has been distressed for over thirty years and are transforming it, so the last thing we need is for any safety and security issues where residents will feel unsafe.”

Marc worked as an investigative reporter for Yankee Institute and was a 2014 Robert Novak Journalism Fellow. He previously worked in the field of mental health is the author of several books and novels, along with numerous freelance reporting jobs and publications. Marc has a Master of Fine Arts degree from Western Connecticut State University.
Email Author
More by Author
Twitter
ProtonMail
«Previous Post
UConn Health commits to hiring formerly incarcerated workers»Next Post
Transit-oriented grants awarded to these six communities