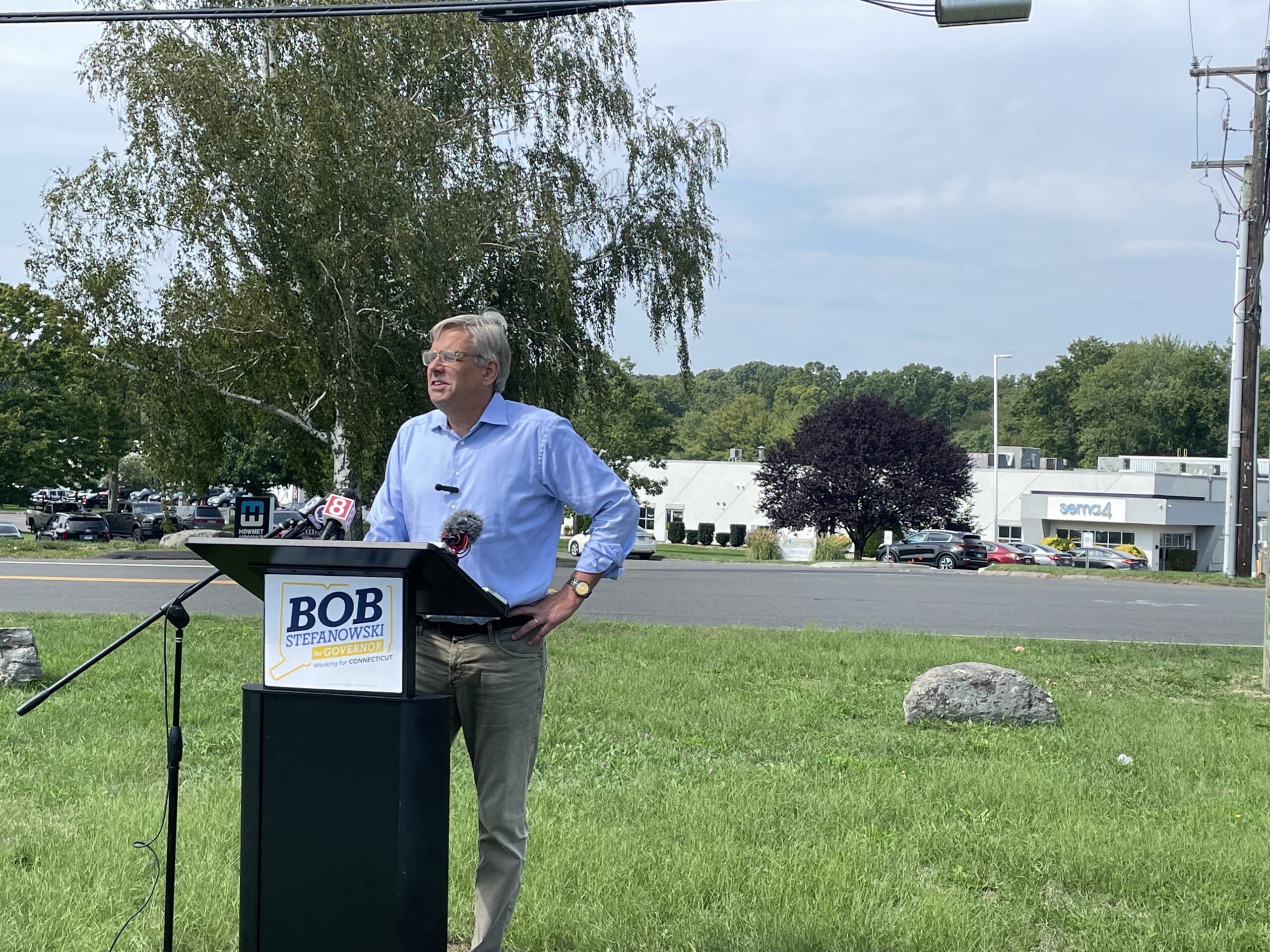 Standing across the street from a SEMA 4 laboratory in Branford, Republican gubernatorial candidate Bob Stefanowski criticized Gov. Ned Lamont for agreeing to only two debates this election season.

Citing investigations by the Federal Bureau of Investigation into the State Pier project and a school construction scandal involving former Office of Policy and Management Deputy Director Kostantinos Diamantis, and the awarding of Connecticut COVID testing contract to SEMA 4, a company in which Lamont’s wife had investments, Stefanowski said the Lamont administration has a transparency problem.

“This is a really, really important election and to put it mildly Gov. Lamont has not been the most transparent governor,” Stefanowski said. “The voters of Connecticut deserve to hear the positions of both candidates. It’s bizarre to me that Gov. Lamont is dodging it.”

Lamont’s campaign spokesman Jake Lewis told the CT Mirror Friday that “Gov. Lamont is excited to speak directly with the voters of Connecticut and discuss the issues that are important to them and their families.”

Stefanowski said if the governor will not agree to more debates, the length of debates should be extended because an hour between the candidates – including at least one debate with Independent Party Candidate Rob Hotaling – would not provide enough time.

“Do you think its fair to the people of Connecticut that they get less than an hour with this governor over the next fifty days to make a critical decision? It’s not right, it shouldn’t stand,” Stefanowski said. “I’m in; anywhere, any time, I am in. At a minimum we should be doing four or five debates.”

Gesturing to the SEMA 4 laboratory across the street, Stefanowski criticized the Lamont administration for awarding a COVID-19 testing contract worth $26 million to the company, which had received an investment by Oak HC/FT, a venture capital investment firm run by Annie Lamont.

The Office of State Ethics previously said there was no conflict of interest in awarding SEMA 4 the contract, which was done through the Comptroller’s Office, and both Lamont and Annie have denied having anything to do with the state selecting SEMA 4.

Lamont had previously said that he would donate any profits his family received from the SEMA 4 investment to charity, but Stefanowski said it has been nearly two years and the public has yet to learn the details of any money the Lamont family made from Oak HC/FT’s investment after Lamont released his own tax returns to the public, but not his wife’s.

Stefanowski released his tax returns for the previous three years filed jointly with his wife, but says he is unable to disclose the names of his consulting clients due to non-disclosure agreements.

The press conference came on the same day that Diamantis appeared before the state’s Employee Review Board, arguing that his attempt to rescind his resignation was unfairly denied by former Connecticut Chief Operating Officer and Department of Administrative Services Commissioner Josh Geballe.

Diamantis’ dealings with the State Pier project and school construction grants have come under investigation by the FBI. The state’s Office of Labor Relations argued that employees do not have a right rescind their resignation and that Diamantis did not resign “in good standing.”

In their previous 2018 gubernatorial battle, Lamont and Stefanowski debated twice as many times. Stefanowski is now implying the governor is trying to duck the debates to avoid engaging on issues like the FBI investigations and SEMA 4.

Despite the investigations and allegations, Lamont remains ahead in the polls. According to the latest poll by Emerson College Polling/ The Hill released last week, Lamont is ahead by 10 points.

The governor has reportedly agreed to participate in four other forums where the candidates will be questioned separately.

Marc worked as an investigative reporter for Yankee Institute and was a 2014 Robert Novak Journalism Fellow. He previously worked in the field of mental health is the author of several books and novels, along with numerous freelance reporting jobs and publications. Marc has a Master of Fine Arts degree from Western Connecticut State University.
Email Author
More by Author
Twitter
ProtonMail
«Previous Post
Feds approve CT highway electric vehicle charging plans»Next Post
CT had highest influx of young professionals in New England