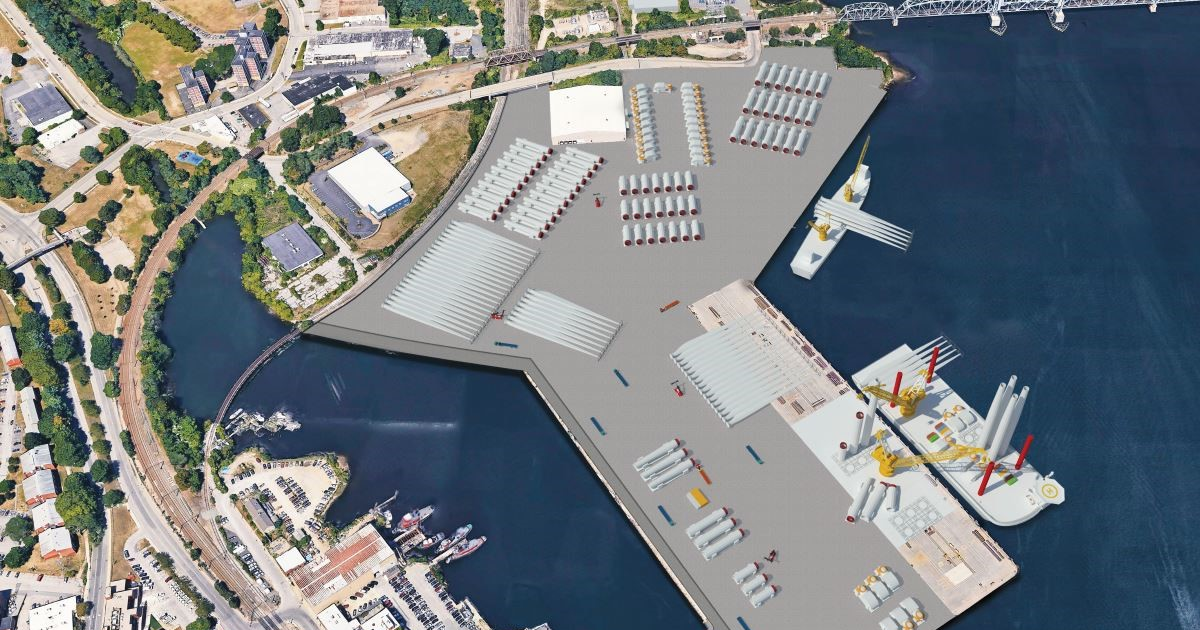 The costs and potential return on investment for the State Pier project in New London became a debate between board member David Pohorylo and Connecticut Port Authority (CPA) chairman David Kooris, during a Tuesday meeting of the Port Authority Board.

The back and forth came following CPA Executive Director Ulysses B. Hammond’s summation of an analysis on the return on investment of the State Pier Project, a $255 million effort to turn the State Pier into a heavy lift port and staging area for an offshore wind farm scheduled to come online in spring of 2023.

Hammond said NEO will have invested $117.5 million to the project through a 10-year, $20 million lease of the State Pier, a minimum of $5 million in revenue share from terminal operator Gateway, $77.5 million in facility capital improvements and $15 million investment in facility equipment, enabling the Pier to become heavy-life capable.

Hammond cited the potential for another 7-year sublease option and the option to lease the State Pier to other offshore wind companies that would be subject to future negotiations. He said the analysis does not include income tax payments made by the construction workers at the State Pier, future workers assembling the wind turbines, supply chain and economic development in the region and host payments to the City of New London.

“In my opinion, a near-term, approximately 20-year payback on a public infrastructure project is impressive,” Hammond said, adding that the facility will be owned by the public for decades thereafter. “As is clear by any number of measures, this infrastructure project scores very high in the financial return and benefit that will accrue to the state.”

Pohorylo, however, argued that NEO’s investment shouldn’t count as a return because they are benefiting from the State Pier project through developing the offshore wind farm, and upgrading facility equipment for their own use while paying a discounted rate for the lease that will not make up for the investment.

“I’m looking at money going in, whether it’s private or public, and what’s coming out,” Pohorylo said. “I see we’re getting $25 million over ten years and I see NEO greatly benefitting from all of the money put into this project, not only by themselves but by the State. I just think the difference here is way out of whack.”

“I see that to be a complete mischaracterization because it ignores the fact that this is public asset,” Kooris said. “It ignores the fact that we have multiple opportunities in future negotiations, we have sublease potential, and I don’t think it’s fair to discount that potential for future revenue and claim it does not offset the cumulative costs and ignore that only a portion of that cost was a state investment.”

“The private money is in lieu of them paying a fair rent for this facility,” Pohorlyo said. “What I see as $260.5 million, as of today, and I don’t know what it’s going to be when you’re done with this.”

“We have very little benefit in ten years and we’re hoping for more happening down the road,” Pohorlyo said. “Let’s just be honest and say it. That’s what it is. We don’t know what it’s going to be after ten years, hopefully a lot more.”

“You can’t claim the private money as a state investment. I’m sorry, but that’s incredibly disingenuous,” Kooris said. “There’s not a single public infrastructure project in the world that repays itself in benefits in ten years.”

The exchange came prior to the Port Authority Board approving a contract amendment that added an additional $7.4 million in costs to the State Pier project. Although the Port Authority was able to pull funds away from other areas, including future railroad lease revenue, to cover the cost without further state help, Kooris said it is likely the last time they will be able to do so if future problems arise.

The State Pier project has had its fair share of problems and issues, including an initial estimated cost of $93 million that has risen to $255 million. The last increase of $20 million in state funding was said to be the last round of state money going toward the project.

Hammond said that he sees a return on investment analysis as an insufficient way to judge a public works project.

“In my experience, return on investment or ROI is an atypical measurement when assessing the efficacy of capital construction, infrastructure improvements and core maintenance of public assets,” Hammond said. “It is more common, though highly complex, to create a benefit cost analysis that identifies the various direct and indirect benefits of public infrastructure projects and improvements.”

Hammond said, to his knowledge, no benefit cost analysis was conducted for the State Pier project.

Marc worked as an investigative reporter for Yankee Institute and was a 2014 Robert Novak Journalism Fellow. He previously worked in the field of mental health is the author of several books and novels, along with numerous freelance reporting jobs and publications. Marc has a Master of Fine Arts degree from Western Connecticut State University.
Email Author
More by Author
Twitter
ProtonMail
«Previous Post
CT State Library announces return of award-winning educational program»Next Post
Connecticut adds 4,400 jobs, unemployment to 4%