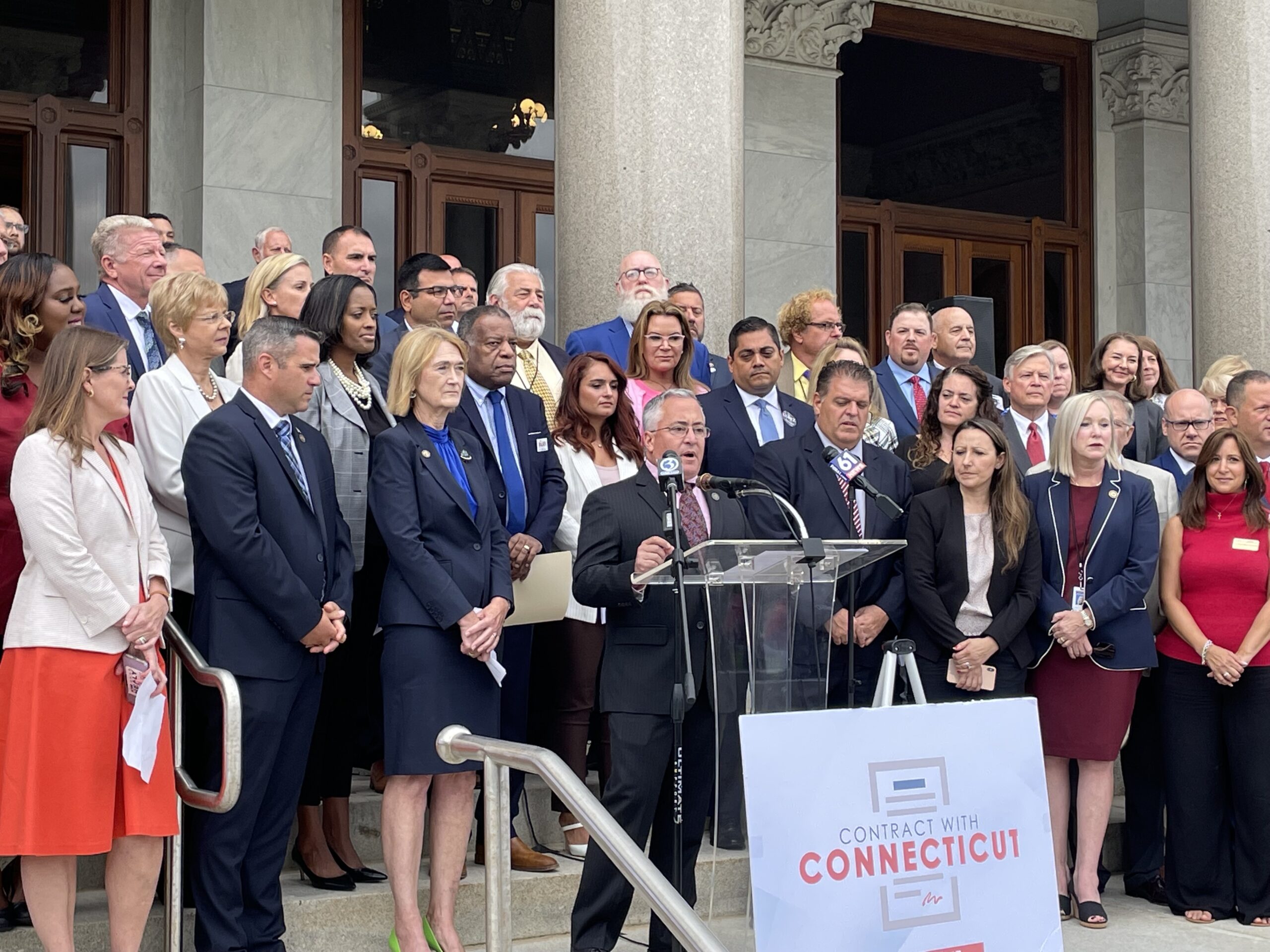 Republicans from the Connecticut House of Representatives gathered alongside a number of house candidates at the Capitol to outline their “Contract with Connecticut,” a series of proposals aimed at taxes, crime, zoning regulations, education and government transparency.

The proposals include lowering the state income tax from 5 percent to 4 percent for families making less than $175,000 per year and indexing state income tax brackets so that “taxes paid on earnings do not outpace inflation.” They also call for repealing the highway use tax on trucks, raising the property tax credit from $300 to $500 and eliminating the 1 percent tax on restaurant meals.

“I think the one message I’m hearing, and I know my colleagues are hearing as they talk to the voters, are just how unaffordable lives are at the moment,” said Holly Cheeseman, R-East Lyme. “Inflation is out of control. We are looking, as a result of our good fiscal policies, at record surpluses — $4.3 billion last year, projections of $2.3 billion this year – our residents are saying we have all this money, can’t you help us?”

House Republican Leader Vincent Candelora, R-North Branford, said their tax proposals would amount to roughly $700 million, with the income tax reduction amounting to between $750 and $1,200 in income tax relief per household. “I think the point is that what we’re seeing in the state of Connecticut is that the Democrats aren’t releasing any money to the residents of Connecticut.”

Republicans have been calling for more tax relief to combat inflation over the past year, after Democrats passed a package of tax cuts, some permanent and others temporary, totaling $660 million. Republicans have said the package wasn’t enough.

At least some of the tax proposals resemble Republican gubernatorial candidate Bob Stefanowski’s proposals, including eliminating a number of small taxes and fees that generate little revenue, but the House Republicans also indicate they want to push back on proposed statewide zoning changes, education policies and the 2020 Police Accountability Act.

“For too long the majority party has taken an approach where they romanticize criminals and villainize law enforcement,” said Rep. Greg Howard, R-North Stonington, a police detective. “The reality is the true victims of crime are being ignored.”

The crime proposals would increase penalties for crimes committed using a stolen vehicle or firearm, expand the circumstances under which juveniles can be charged on the regular criminal docket for violent crimes and prosecuting crimes where the crime occurs, rather than where the alleged perpetrator lives.

Republicans also proposed a “Families First Act,” which includes posting school curriculum online and allowing more public comment at board of education meetings, rather than limiting comments to only agenda items with time constraints.

The proposal comes as some parents have been clashing with school boards of education over school curriculums that include Diversity, Equity and Inclusion materials, and a Project Veritas video that showed a Cos Cob Elementary School vice principal saying he doesn’t hire conservatives, Catholics or teachers over the age of 30, which is now being investigated.

“Parents are our children’s first teachers and it’s parents, not politicians and government bureaucrats, who have the ultimate responsibility for their kids,” said Rep. David Rutigliano, R-Trumbull. “Parents need to be front and center when it comes to decisions about their families’ education and healthcare.”

Local zoning regulations have come under fire over the past two years over claims that local zoning rules are excluding affordable housing developments and contributing to racial segregation in the state. The proposed statewide changes to zoning laws, however, have become contentious as a number of more wealthy towns like Greenwich and New Canaan have pushed back hard against what they call “one size fits all” zoning changes.

“[Democrats] want to override important local planning and zoning decisions for housing and other types of development and threaten our municipalities with loss of state funding,” said Rep. Tami Zawistowski, R-East Granby. “They also impose costly mandates on our cities and towns without providing the funds necessary which raises property taxes.”

House Republican Leader Vincent Candelora, R-North Branford, said that the reforms enacted under the 2017 budget, which includes the volatility cap being used to keep the rainy day fund full and pay down pension debt, have led to the surpluses state government is now enjoying, but “the second part of the equation” was ultimately, in their eyes, to be able to lower the tax burden.

“These proposals can come out of this year’s surplus,” Candelora said. “On an ongoing basis we do believe we can generate additional revenue. The paying down of the pension debt is going create $350 million of additional revenue in the State of Connecticut for this budget cycle. What Republicans are saying is that $350 million needs to go back to the residents of Connecticut, not being spent on more pet projects.”

Connecticut lawmakers not so conservative, according to CPAC

Marc worked as an investigative reporter for Yankee Institute and was a 2014 Robert Novak Journalism Fellow. He previously worked in the field of mental health is the author of several books and novels, along with numerous freelance reporting jobs and publications. Marc has a Master of Fine Arts degree from Western Connecticut State University.
Email Author
More by Author
Twitter
ProtonMail
«Previous Post
Study: Personal partisanship may not be undermining democracy»Next Post
Can you smell that? We can, too